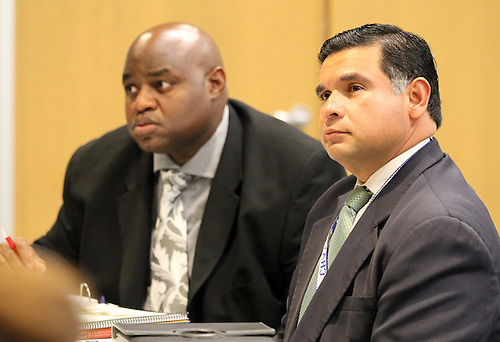 After 18 years as an educator and nearly a decade as a principal, Rene Sanchez is still learning. Despite his previous experience, the new principal of Chavez High School still wants to learn how to become a better leader in his first year with HISD.

Sanchez joins more than 40 of the district’s newest leaders this month in HISD’s New and Emerging Leaders Institute (NELI). The group will spend July learning new tools and how to establish efficient work systems on their respective campuses.

“I certainly want to find out what the expectations are for principals in HISD,” said Sanchez. “It tells me that the district cares about the outcome. They’ve asked us to take over these campuses, and if we don’t have the proper preparation, we’re both at risk.”

Sanchez said one of the reasons he joined HISD and Chavez High School was to honor its namesake, labor leader and civil rights advocate Cesar Chavez.

“We even named our first-born son after him,” he said.

The enthusiasm of leaders like Sanchez is encouraging for the district, said Alan Hooker, HISD’s leadership development officer, himself a recent addition to the HISD team. He said that the institute teaches lessons that will have positive effects for years to come.

“It is just as important as a contractor knowing how to use his tools,” said Hooker. “We want to have our principals prepared before they walk into their schools.”

NELI is designed to give attendees guidance, instruction, and best practices when it comes to hiring, curriculum, data resources, and budgeting. The cohort of classmates and district colleagues will provide benefits to attendees long after the institute is over later this month, Hooker said.

“It brings part of that familiarity. It provides additional resources and materials for individuals who need some help,” he said. “If I have an issue, I can pick up the phone and contact those resources.”

This is the second summer the district has held the training program for new leaders. “There’s a reason why we continue this work,” Hooker said. “The institute is critical if we want everyone to get off to a good start.”