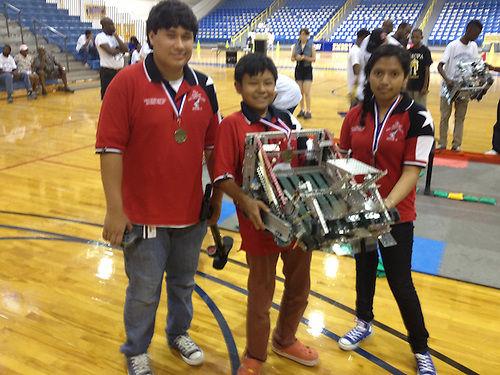 Sam Saenz, coach of the EECHS team, said his students’ robot was designed and re-designed over a six-month period. There was an unfortunate incident on the way to nationals, and the students had to do major repairs to get their robot back into competition shape.

“The airport security badly damaged our robot as they inspected it at Bush Airport,” Saenz said. “We had to rebuild several parts of the robot upon arrival in Daytona Beach. Some steel axels were bent beyond repair, and at least one motor was ruined and had to be replaced.” 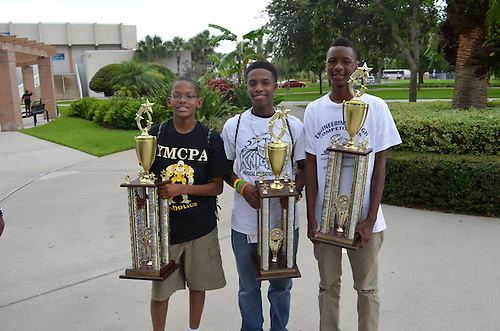 The VEX competition, called “Sack Attack,” took place in a 12 by 12 foot arena. Half-pound sacks filled with beans were placed around the arena and had different point values based on their colors. For the first 15 seconds of the round, each robot was autonomous, running on a computer language called Robot C. The robots collected the sacks and put them in troughs above the arena. After those 15 seconds were up, the students controlled the robots for the next 75 seconds, trying to collect more sacks. They could also take sacks away from the opposing team, attack their opponents, and block their opponents from scoring. There were 90 rounds.

“Our team dominated the competition with a final score of 500 points,” Saenz said.

EECHS Principal Tamera Bolden said that students who participate on the robotics team are excelling in other areas as well.

Vince Hamilton, coach of the Young Men’s College Preparatory team, said this was the first time in seven years that an HISD team had won a national SECME title.