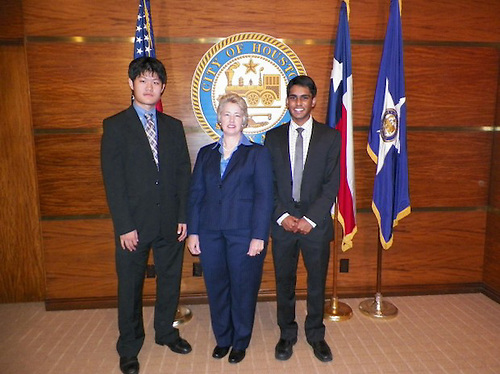 A group of Bellaire High School students won first place in a video contest about the dangers of texting and driving run by Houston Mayor Annise Parker’s Youth Council.

Eleven videos were submitted to Parker’s “It Can Wait, Houston,” an anti-texting-while-driving campaign. The Houston Police and Fire Departments will use the winning videos, including Bellaire’s, in safety presentations at area schools.

The video, produced by students George Chang, Aman Narayan, and Liana Wang, featured a teenager driving her younger sister around town, as they gathered items for their mother’s birthday party. The teenager received a text while driving and, despite her little sister warning her not to, read and responded moments before they were T-boned by another car.

“Our youth tend to think nothing can hurt them, that they are invincible,” Parker said. “That is why it was so important to me that they be involved in this campaign. Their videos do an excellent job of depicting the dangers of texting and driving. I hope their messages will convince their peers, as well as adults, to put the phone down while driving.”

According to statistics provided by Parker’s office, people who text while driving are 23 times more likely to be in a wreck. In 2011, about 13 percent of the 3,000 traffic fatalities in Texas were due to texting while driving.