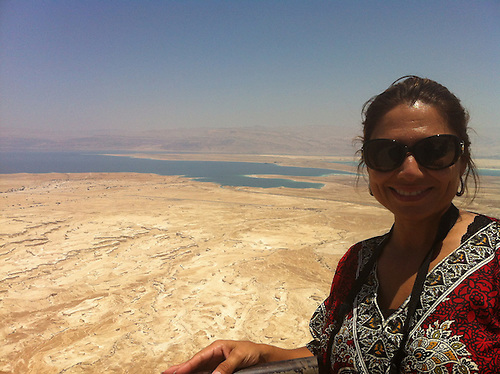 Las Americas Principal Marie Moreno and Stevenson MS teacher Patricia Cooksey recently spent 10 days on a study tour to Israel and the West Bank in hopes of learning more about the region and gaining a better understanding of the struggles refugee students face.

“One-hundred percent of my students come from war-torn countries or have suffered some type of trauma in their home country,” Moreno said. “In order for me to understand exactly what they’ve gone through, I wanted to physically see it for myself. My kids are truly the lucky ones who escaped such horrible conditions.”

Moreno said the trip has made her want to become more involved in her students’ lives outside of the classroom and made her realize how her students feel when they come to a new place. Las Americas is a school specifically for refugee and immigrant students from 37 countries with 34 native languages represented. The school offers intensive English lessons and gradually eases students into courses to prepare them to enter mainstream schools.

“This experience really made me a changed person,” she said. “This year, I plan to attend a variety of faith-based temples, churches, mosques, along with celebrations they observe. It is important for me to understand them in a variety of ways so that I can reach them in ways no other educator has attempted.”

Moreno had a chance to meet with Karen Tal, a former principal in Tel Aviv who is working to turn around other schools in the region. Tal visited Las Americas in October.

“She was truly amazed at our school and what we were doing here in HISD, specifically for refugee students,” Moreno said. “Her school is very similar. She has 72 countries represented and (students) speak lots of languages. It’s a K-12 school. She provides them with lots of support, like we do.”

Cooksey said Israel had been on her travel list for a long time. A few years ago, she was teaching about the region and realized she didn’t know as much as she would like to know, so she attended workshops held by the World Affairs Council of Houston. She traveled to Turkey in 2011 and Saudi Arabia in 2012.

Cooksey said she’s working on a show and tell project to share with her sixth-grade students in hopes of tying what she learned to curriculum objectives.

“I’m currently working on a lesson that will be called ‘Walls: What Are They Good For?’” Cooksey said. “Students will examine and discuss photos of walls and fences, such as walled cities, the Great Wall of China, the DMZ, Mexico’s southern border, the U.S.-Mexico border, the Berlin Wall, and the West Bank Wall.”

The trip included seven other educators from the Houston area and was partially sponsored by the World Affairs Council of Houston. The focus of the study was to talk to Israelis and Palestinians who are dealing with political, economic, social and environmental challenges.