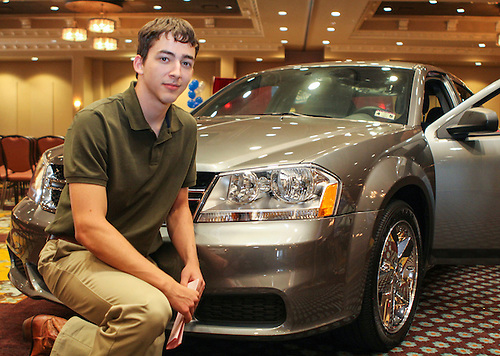 “We are thrilled to be here celebrating their hard work and encouraging them to follow their dreams,” said Helfman who supported this event for the second consecutive year.

Dwyer took more than a dozen AP courses while in high school and will be going to college with nearly 30 credit hours.  The purpose of this annual event is to encourage and recognize recent graduates who enrolled in five or more Advanced Placement (AP) or International Baccalaureate (IB) courses or a combination of both and took the corresponding exams.  Students who score high enough on these exams are eligible to earn college credits. Nearly 1,000 Class of 2013 HISD students qualified for this drawing.

“I know that the road to college is not easy, but it’s exciting to see so many students that have worked incredibly hard,” said HISD Board of Education President Anna Eastman.  “We are confident these students will go on to be successful college graduates and professionals.”

Just like Dwyer, hundreds of recent HISD graduates and their parents attended Sunday’s event.  Many scholars left the Bayou City Event Center with scholarships, laptops, iPads and many other great prizes thanks to the event’s generous sponsors.

“This was an amazing turnout!  We are proud to have seen so many families here to celebrate the accomplishments of these recent graduates,” Grier said.  “They have truly set the bar high by taking such rigorous courses and preparing themselves for college.”

This year HISD students took approximately 23,000 AP exams in May 2013, nearly twice as many than they did in 2009 before Grier launched an aggressive initiative to expand access to college-level courses in all high schools.  HISD graduates also passed 7,800 AP exams this year.