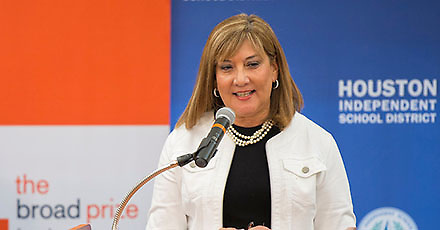 HISD is launching a new program this year designed to increase student achievement “from the middle.” The Lead Principal Initiative pairs highly effective principals with other campus leaders at similar schools to spread the district’s best practices more effectively.

“‘Leading from the middle’ refers to influencing from among, rather than from above, below, or in front of one’s group,” explained HISD School Services Officer Lupita Hinojosa. “It implies positioning ourselves alongside of those we’ve empowered and working shoulder to shoulder with them.”

Unlike HISD’s School Support Officers (SSO), who may be assigned more than a dozen campuses to manage, lead principals are charged with assisting only two or three schools in addition to their own.

“Every school is different, of course,” said Ortíz Middle School Principal Noelia Longoria, “but the goal is to franchise what works. We try to take principals who have been successful at schools that perhaps shouldn’t have been successful (statistically) and show others what we’re doing. When I first came here, Ortíz was in a lot of trouble. It’s not a magnet or G/T school, but we’ve been very successful in adding value. Our students do very well in math and science now.”

Longoria has been assigned to work with two campuses — Stevenson Middle School, where one of her former assistant principals was recently assigned, and Hogg Middle School, which has an established principal but needs support.

“The difference between this and an SSO is that they have more schools,” said Longoria. “We actually work with our schools, not just manage them. So I might have to roll my sleeves up and get dirty, too. It’s not telling them what to do. It’s more about sharing and supporting. We’re coaching them and working hand in hand.”

The Lead Principal Initiative has been implemented at both the elementary and secondary levels, and more than 12 lead principals have been identified.

“We are extremely proud of our lead principals and the work they have embarked upon,” said Dr. Hinojosa. “We know that their successes will be replicated throughout the district and ultimately benefit every student in HISD. The Lead Principal initiative is just one more driver in achieving our vision of ‘becoming great all over.’”