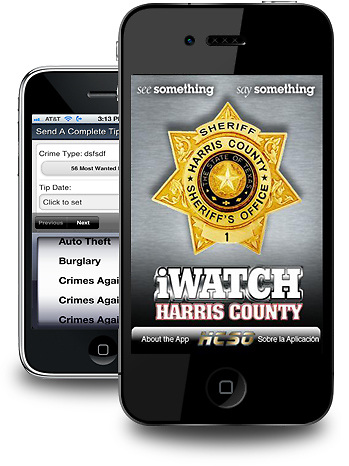 Tips can be sent either by computer or smart phone, and HISD Police Chief Jimmy Dotson is encouraging all members of Team HISD to download the free app to their mobile devices.

“Many students already carry smart phones, as do teachers and parents,” said Chief Dotson. “And while information is often shared among friends and family members as it happens, it doesn’t always get sent to law enforcement. iWatchHarrisCounty can be used to report suspicious activity anywhere, anytime. A simple observation, a single report can help solve or prevent a crime. And if one person can make a difference, consider what the entire HISD community can do.”

“If you see something, say something,” added Sheriff Garcia. “It’s that simple.”

The mobile app for iWatchHarrisCounty can be downloaded for free from the Apple Store or the Android Market. It was developed by iThinQuare Inc. founder and CEO Dan Elliott, after his immediate family was profoundly affected by two violent crimes.