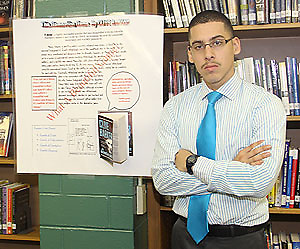 Senior Kevin Berrios, an Advanced Placement Literature student, stands by his project on a banned book by author Clive Barker.

Students at HISD’s Furr High School got a surprise when they got to class on Sept. 26. As they settled into their seats, they heard the stern voice of HISD Police Officer Craig Davis on the intercom, announcing that the library was closed and forbidding students from entering it.

The teens’ curiosity grew all morning, as they passed by a library whose windows were obscured by black paper and covered in crime-scene tape, with a few holes strategically placed to reveal a cart labeled “banned books” filled with titles pulled from their own library’s shelves. The hallway leading to the school library was also decorated with mock crime posters featuring Furr teachers “wanted for reading banned books” and a display case filled with book covers of banned books found in Furr’s collection.

The exercise was designed to bring awareness to Banned Books Week, which took place Sept. 23–27, and to get students thinking and talking about the dangers of censorship, the importance of freedom of speech, and the value of diversity in ideas.

“People would ask, ‘What books are being banned?’” said junior Sabrina Olivera, “and they were things like Harry Potter, Twilight, and The Hunger Games—all of these books that kids really love and love to talk about. Many of them couldn’t understand why they would be banned.”

Olivera also said that many of her peers were also surprised to see how many banned books they had already read, such as Ray Bradbury’s dystopian classic, Fahrenheit 451, and spurred others to check out the titles that they hadn’t yet read.

“What the students found really hilarious was the number of books banned for bad language,” said librarian Gerrod George, “as if they’d never learn it or hear it if they didn’t read it.”

The event also featured special guest speaker Bryan Parras from Nuestra Palabra, who discussed the activities of the Houston-based Librotraficante. Parras described his visits this past summer to two other “Underground Libraries” that featured cultural studies collections.