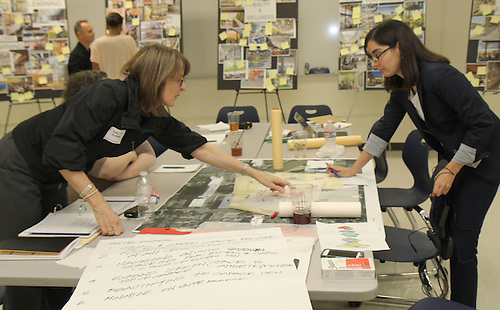 Architects go over design ideas for the new DeBakey High School for Health Professions during a design charrette.

Houston ISD will be rebuilding two of its specialty high schools into 21st century campuses that cultivate creativity and collaboration when construction gets underway on the new DeBakey High School for Health Professions and the new High School for the Performing and Visual Arts.

That consensus came as each school held a two-day design charrette with their Project Advisory Teams and architects to discuss specific goals and aspirations for the new campuses.

“Students are more open and receptive to learning if they can access it visually,” said architect Greg Papay, who is part of the architect team designing the new DeBakey. “We’re designing a 21st century school where learning will happen in a variety of spaces.”

DeBakey and HSPVA are among 40 campuses that will be rebuilt or renovated under the district’s 2012 $1.89 billion bond program. Both high schools offer specialized educational programs that HISD hopes to enhance through the new facilities.

The new HSPVA campus will be located in downtown Houston, providing 750 students easy access to the city’s arts and theater district. DeBakey’s new building will remain in the heart of the Texas Medical Center and serve up to 1,000 students with cutting-edge technology and laboratories.

Charrettes, or workshops, are being held for each bond campus as they transition from planning into the design phase. Architects are gathering all the ideas so they can translate them into drawings.

“As a team, we’re working together to create state of the art facilities for HISD,” said Dan Bankhead, the district’s general manager of facilities design. During the DeBakey and HSPVA design workshops, he challenged participants to think creatively.

Some of the ideas included flexible spaces that connect with one another through the use of glass that maximizes natural light.  Students also said they want common areas where they can collaborate beyond a formal classroom space.

“For the new building, transparency will be very important,” said HSPVA student and violinist Gabriel Maffuz. “It’ll make you feel like you’re truly in an artistic environment.”

HSPVA Principal Scott Allen wants the new school to create a culture of inspiration. “We don’t want to have arts on one floor of the school and academics on another. It needs to be integrated,” he said.

During the DeBakey design charrette,  participants discussed the importance of flexible learning laboratories connected visually through an atrium.  For inspiration, the group worked with building blocks and looked at photos of schools, office buildings and green spaces.

Though both campuses will be in busy urban locations, the Project Advisory Teams stressed the need for  sustainable design that creates a connection with the outdoors through roofs, terraces or balconies.

“I’m really impressed with the idea of our school having a green space because that’s a forward thinking concept that will benefit a lot of students,” said senior Anjay Batra, president of the school’s student council. “At DeBakey, we work hard, so we need a more relaxed environment.”

DeBakey Principal Agnes E. Perry, said the charrette provided a good way to exchange ideas and build consensus.  “It will make for a better facility in the end,” she said.