Board of Education swears in HISD’s new District IX trustee

The Houston Independent School District Board of Education is expected to vote Thursday during its regular monthly meeting on the second reading of a policy update that would prohibit offensive or culturally insensitive school mascots.

The proposed policy would affect four schools — Lamar High School Redskins, Westbury High School Rebels, Hamilton Middle School Indians and Welch Middle School Warriors.
If passed, the policy update would go into effect during the 2014-2015 school year. Each school would be required to follow district policy in selecting its new mascot and would be allowed to respectfully retire their existing mascot. 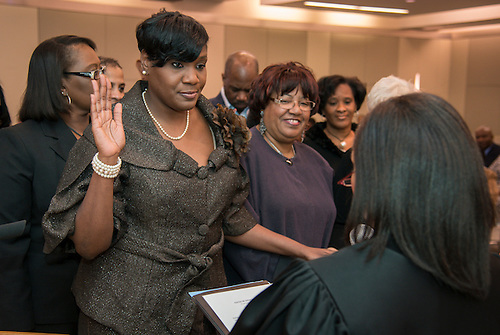 Wanda Adams was flanked by family and friends Thursday afternoon as she was sworn in as the new District IX HISD trustee. Judge Maria Jackson of Harris County’s 339th District Court administered the oath of office.

Also on Thursday, HISD’s new District IX Trustee Wanda Adams was sworn in during a ceremony in the Board Auditorium.

Adams served three, two-year terms as Houston City Council member for District D before seeking the HISD seat. A native of Houston, she is a graduate of Kashmere High School and earned bachelor’s and master’s degrees from Texas Southern University. She is a professor of political science at her alma mater, bringing to her classroom not only experience as an elected official but a long career in public service for organizations and agencies including the Houston Housing Authority and the Mayor’s Assistance Office.

The board’s regular monthly meeting begins at 5 p.m. on Thursday, January 16, 2014, in the board auditorium of the Hattie Mae White Educational Support Center, 4400 W. 18th Street. Click here to view the full agenda.

The board meeting will be broadcast live on HISD-TV (Comcast Channel 18 or AT&T Channel 99) and online at www.hisdtv.org.