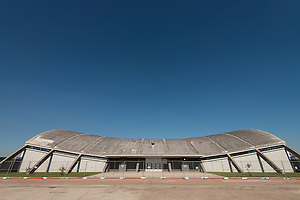 Construction crews made progress on the demolition of Delmar Fieldhouse on Monday as part of HISD’s plans to level the 55-year-old athletic facility and replace it with a modern complex.

The building, located at 2020 Magnum Road adjacent to the Hattie Mae White Educational Support Center, will be replaced with a new three-story facility funded by the district’s 2012 $1.89 billion bond program. The 139,000-square-foot facility will include a basketball and volleyball arena, additional locker rooms, training rooms, and athletic storage to accommodate the existing athletic stadium and ball fields. 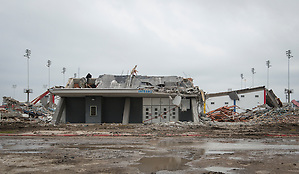 Construction of the new facility, designed by PBK Sports, is scheduled to begin in the second quarter of 2014 by DivisionOne Construction, the Construction Manager at Risk (CMAR) selected by HISD to construct the new athletic complex. The design team, the district’s athletic department and HISD’s bond department are developing design concepts and exploring construction phases for the $44.7 million project that is expected to be complete by mid-2015.

Site renderings show a facility designed with a stone-end appearance, metal panels, large glass windows, and a balcony that overlooks the football stadium. One of the building’s unique features is a widened concourse that can be used as flexible multipurpose space for district meetings and programs. The arena’s lower level seating will also be retractable, allowing the district to easily transform the space to be used for graduation ceremonies, principal meetings and other special events.

“These open and flexible areas will allow the facility to be utilized more frequently throughout the year,” said HISD General Manager of Construction Services Dillon Brady.