The emphasis was on the “student” part of student-athlete Wednesday afternoon as more than 75 Houston ISD’s seniors signed symbolic certificates to continue their educations and athletic careers at a National Signing Day ceremony.

The male and female athletes gathered with their coaches, principals, and parents on Feb. 5 to celebrate their achievements, and to hear sage advice about their futures at the Region IV Education Service Center in northwest Houston.

HISD’s legendary former Athletic Director Joe Tusa reminded athletes that their abilities had earned them a rare opportunity, and that they should make the most of it. “So many of you – including myself – would not have been able to go college, except for these scholarships,” Tusa said. “Get that degree. Keep your studies up. If you get that degree, it is with you the rest of your life.”

HISD Board of Education Secretary Rhonda Skillern-Jones, a former college athlete, asked students to maintain the discipline they had learned from sports in high school. “You (student-athletes) have to work twice as hard to be just as good, juggling sports and studies,” she said. “It will not be easy, but it will be worth it.” 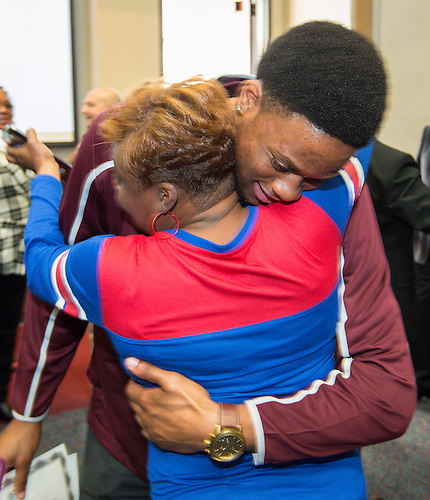 Westside football star Frank Iheanacho was among those being honored Wednesday. He has been touted as one of the top receivers nationally, and was recruited widely – by Arkansas, LSU, Oregon, Florida State, and Texas A&M. On Wednesday morning, he signed his formal NCAA commitment letter to Texas A&M. “It meant a lot,” he said, “but being part of this (HISD ceremony) was really meaningful, for all of us to be recognized. This is why God put me on this Earth.” Iheanacho said he’ll stay focused on his academics as an Aggie, so he can pursue a career as a broadcast analyst.

HISD athletes signed to play at 61 different schools locally, throughout Texas, and the U.S., including a number of NCAA Division I powerhouses. The camaraderie was evident as several teams celebrated multiple college admissions together – including five Bellaire HS softball players, and three from Chavez HS. Six Bellaire HS baseball players will move onto college diamonds, as well, and three from Lamar – including John Fallon, who will be wearing Harvard crimson. Four Lamar football players will move on together to play at Southern Methodist University.

Although traditionally, National Signing Day is when senior high school football players all over the country complete their letters of intent with colleges and universities, for the past five years, HISD has included both female and male athletes from all sports, to showcase the district’s athletic and academic talent. Athletes are signing in basketball, football, baseball, softball, soccer, track, lacrosse, wrestling, golf, and swimming.

A searchable database of HISD athletes from the Class of 2014 is also available this year.

3 thoughts on “‘Get that degree,’ HISD’s college-bound athletes are reminded”