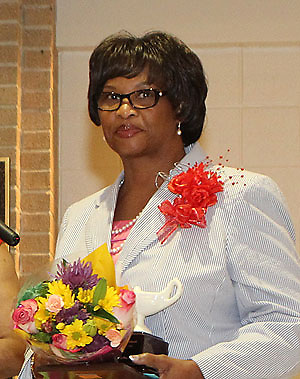 Violet Clarke, who serves as the school nurse at Chávez High School, has been named one of the area’s “Top 10 Nurses” by the Houston Chronicle for 2014.

She was selected from among hundreds of nominees who come from all fields of nursing in the greater Houston area, including local hospitals, schools, nursing homes, rehabilitation centers, and home health workers.

“The job of a school nurse is unique,” wrote former Principal Dan De Leon about Clarke on his nomination form. “Unless you have done it, you do not realize the fast pace and varied extremes of this profession. One minute, a student walks in with a sore throat, and the next, you get a call about another who is having a severe allergic reaction in another part of the building. Before the hour is up, you have dealt with three parents, a teenager who is afraid to (confess) she is pregnant, another who is being abused at home, and a student who needs his daily medication to control his bipolar disorder…but Nurse Clarke makes it look easy.”

“When Violet saw how many students failed their vision screening…(and) could not afford glasses,” added Dr. Joseph Chorley in his nomination form, “she developed a plan to collaborate with optometrists, physicians, nurses, and administrators…to make sure that vision is not one of the hurdles that (prevents) academic achievement.” And as a direct result of her efforts, he said, “hundreds of students have received low-cost or free glasses.”

“If Ashlee isn’t feeling well,” said parent Ada Thomas, “Mrs. Clarke can tell without her even having to say anything. It’s a good feeling, knowing that when I send my daughter to school, I will not have to worry.”

Clarke, who has been a member of Team HISD since 2004, was also named one of HISD’s Nurses of the Year for 2013. She will be recognized along with the other honorees at a luncheon held May 8 at the Crowne Plaza Houston Medical Center, as well as in a special section of the Houston Chronicle on May 11.