A seventh-grade student at T.H. Rogers School has won a Gold Key in The Scholastic Arts & Writing Awards for her touching essay about what it’s like to have a sibling with autism.

Hailey Skye Tulio, 12, wrote about her life with her 22-year-old brother, Patrick. She said she chose Patrick as her topic because spreading autism awareness is very important to her. 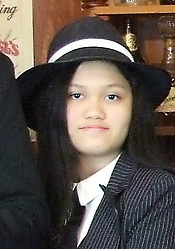 “There are many different kinds of autism, and each person diagnosed will have his own unique actions and expressions,” Hailey wrote. “In Patrick’s case, he’s in the middle, not too oblivious to the world, but not that aware of it either. If you ask him if he is ‘happy or sad,’ he will always say that he’s ‘happy’ even though he feels differently.”

Hailey’s essay is an honest glimpse into the challenges Patrick and his family face daily. She vividly describes the not-so-good times.

“We would always hide the toilet paper from Patrick, but (one) weekend he found it,” Hailey wrote. “He found it amusing to put the whole roll in the toilet and flush it. Even though the toilet clogged up, he just kept on flushing. Soon the toilet overflowed, and the bathroom floor started getting flooded. Dad really freaked out since we live on the second floor of our condominium. Our neighbors down below weren’t too happy when it started ‘raining’ from their bathroom ceiling.”

She also makes sure the reader knows how that Patrick has a kind heart and that his family is always there to support him. 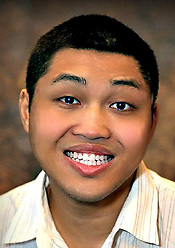 “He does not like it when somebody is mad or upset with him,” Hailey wrote. “He will do anything he can to keep someone from staying mad at him. If you stay mad, he will start crying. We will always protect him since he cannot do it for himself. I have gotten to the point that when people do not understand his behavior even though we tell them that he has autism, I get mad at them.”

Hailey also described how her two older brothers stand up and keep close tabs on Patrick. Both of those brothers are in medical school and plan to pursue specialties, including sleep and nervous disorders and genetics, which deal with autism.

Hailey’s mother, Chris, said her daughter excelled in math and science in elementary school, but English is slowly becoming her niche. Hailey also entered an art project of a butterfly made out of beads, wires, and fabrics in the Scholastic Awards.