Houston ISD’s JROTC program formally honored its top six cadets from the class of 2014 during the annual HISD JROTC Final Review and Awards Ceremony on April 26.

The students were chosen from the ranks of all seniors in HISD’s 26 JROTC programs and all were promoted to cadet colonel (Army JROTC) or cadet captain (Navy JROTC), which is the highest ranking attainable in the JROTC program.

The selection board members for this year’s competition consisted of cadets from Texas A&M University. Cadets received points based upon their scholastic standing, demonstrated leadership skills, and participation in extracurricular activities. At the competition, cadets were awarded points for their proficiency on a JROTC curricular-based skills test, an oral presentation, a personal evaluation consisting of military courtesy, knowledge of current events, appearance, knowledge of geography, and an evaluation of first-aid techniques such as lifesaving, bandaging, and transporting sick and wounded victims.

The top six graduating seniors from the class of 2014 are: 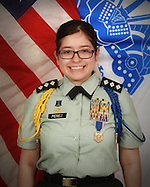 Cadet Colonel Ana Perez has distinguished herself in academics and JROTC activities throughout her high school years. Perez served as the cadet battalion commander for Houston ISD’s 15th Army JROTC Battalion at the High School for Law Enforcement and Criminal Justice. Perez is ranked 11th out of 118 graduating seniors with a grade point average of 3.95. She also serves as the president of the Business Professionals of America, historian for the National Honor Society, a member of the JROTC Unarmed Drill Team, the JROTC Physical Training (PT) Team, and commander of the JLAB Academic team. Among her many achievements in the JROTC Program, Perez has been awarded the Superior Cadet Medal for four years, and has been a finalist in the Cadet Corps Leadership Selection Board competition for all four years of high school culminating in her selection this year as the position of HISD JROTC Cadet Corps Commander. After graduation, Perez will attend Texas A&M University and become a proud member of the A&M Corps of Cadets. She intends to major in genetics and work in the medical profession. 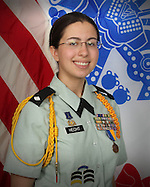 Cadet Colonel Danielle Hecht has distinguished herself in academics and JROTC activities throughout her high school years. Hecht is an International Baccalaureate Diploma candidate in her graduating class at M. B. Lamar High School. She maintained a 4.46 grade point average and is ranked 72 out of 824 graduating seniors. This school year, Hecht served as the cadet battalion executive officer of HISD’s 7th Army JROTC Battalion. Among her many achievements in the JROTC program, Hecht has been awarded the Superior Cadet medal four times, the Distinguished Cadet ribbon three times, the Academic Excellence ribbon three times, and a variety of team, service and achievement awards. She has been captain of the JROTC Leadership and Academic Bowl Team, the Female Ranger Swim Team, the marksmanship team, and the physical fitness team. Hecht is also an accomplished cellist in the Lamar High School Orchestra having received top recognition at district, regional, and state competitions. Hecht also participates in other campus organizations such as the National Honor Society, the Student Council, and the Japanese Club. Outside of JROTC she plays cello in the Houston Youth Symphony and serves a senior educator with the Houston Zoo Crew. Hecht has accepted an appointment to the U.S. Military Academy at West Point, New York where she will become a member of the Class of 2018. 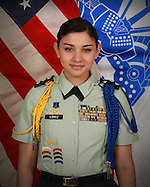 Cadet Colonel Alexis Lopez has distinguished herself in academics and JROTC activities throughout her high school years. Lopez previously served as an HISD JROTC Cadet Corps Cadet Command Sergeant Major and Cadet Battalion Commander of HISD’s 4th Army JROTC Battalion at Charles H. Milby High School. Lopez has maintained a 3.96 grade point average and is ranked number 26 out of 476 students in her senior class. She is a member of the National Honor Society, serves as the historian for Student Council and president of the National English Honor Society. She is the Commander of Milby High Schools Unarmed Drill Team where she has been recognized as the Top Drill Team Commander in several drill competitions this school year. Lopez has been awarded a four-year scholarship starting at Bryn Mawr College. She intends to major in biology and minor in psychology. Her career aspiration is to become a plastic surgeon. 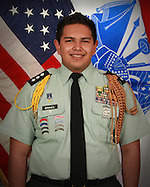 Cadet Colonel Christian Briones has distinguished himself in academics and JROTC activities throughout his high school years. Briones has served as the Alpha Company first sergeant of HISD’s 9th Army JROTC Battalion at S.P Waltrip High School. Briones has been an outstanding cadet for four years. Briones has maintained a 3.9 grade point average and is ranked number 16 out of 405 students in his senior class. Briones has also distinguished himself in community support activities. He is a member of the National Honor Society and volunteers at Lakewood Church. Briones was commander of the Waltrip JROTC Marksmanship Team for two years. During his tenure as Marksmanship Team commander, the team finished as high as third place in HISD, a first for Waltrip JROTC Rifle Team. He has also exhibited tremendous leadership ability as a member of the Waltrip JROTC Drill Team for four years. Briones plans to attend Texas A&M University and major in aerospace engineering. 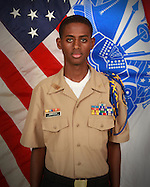 Cadet Captain Sabona Simbassa has distinguished himself in academics and JROTC activities throughout his high school years. Simbassa is a senior at Booker T. Washington High School and the High School for Engineering Professions. Simbassa currently serves as the cadet company commander for HISD’s 3rd Naval JROTC Battalion. He is ranked second out of 169 graduating seniors, with a grade point average of 4.14, and is the school’s salutatorian. Simbassa is involved with several organizations, both on and off campus. He serves as the Ethiopian Community Youth Leader for mentoring, has served in numerous leadership positions in the school and NJROTC, including operation’s officer, safety captain for FIRST Robotic team, and project manager of One Mile One Pound rocket launch team. He also served as vice president of the National Honor Society as a senior, and is a member of the Mexican American Engineering Society. He has attended Texas Boys State at University of Texas-Austin as delegate from American Legion Post, and has been a member of the Marksmanship team for two years and the commander of the NJROTC Academic Team. He has been awarded the Military Order of World Wars Award of merit, the Reserve Officers Association Medal, and ribbons for Honor Cadet, Distinguished Cadet, Military Aptitude, Exemplary Appearance, Community Service, Participation, Physical Fitness and several others. He will attend Texas A&M in the fall of 2014, majoring in biomedical engineering. 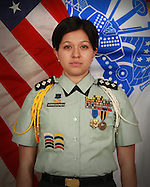 Cadet Colonel Jazmin Arredondo has distinguished herself in academics and JROTC activities throughout her high school years. Arredondo has served as the Charlie Company commander of HISD’s 1st Army JROTC Battalion at Sam Houston Math, Science and Technology Center. Arredondo has been an outstanding cadet for four years maintaining a 3.89 grade point average and is ranked number 25 out of 613 students in her senior class. Arredondo has also distinguished herself in community support activities. She is a member of the National Honor Society and volunteers at several organizations in the community. She served as the commander of the Sam Houston MSTC JROTC Color Guard for three years. While serving as the Battalion’s cadet logistician, Arredondo earned a perfect scored during the annual HISD JROTC Department Inspection. During her tenure as Color Guard commander, the team finished as high as third out of 26 teams in HISD. The team has performed at numerous events throughout Houston, including those attended by U.S. Congress representatives. Arredondo has also exhibited tremendous leadership ability as a member of the Sam Houston Golden Knight’s Drill Team, the JROTC Leadership and Academic Bowl Team, and the Physical Fitness Team. After graduation, Arredondo will attend Texas A&M University and major in geography and minor in spatial science/meteorology.