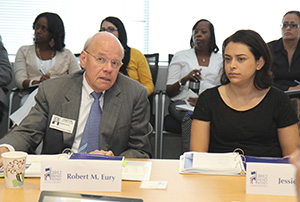 The next eight months of the year will be marked by much progress in the 2012 bond program, including the start of construction on all of the schools in the first group.

“We’re moving very quickly through our design phase,” said Daniel Bankhead, HISD’s general manager of Facilities Design. “This is an exciting time. We’re defining the character of the buildings.”

Bankhead provided an update Tuesday on the architectural work happening within the bond program during the quarterly meeting of the district’s Bond Oversight Committee.

The nine-member panel heard from district staff on all aspects of the district’s buildings programs, from design to communications.

One of the key milestones in 2014 will be the completion of the 2007 bond program. As the work winds down this year, major renovations at Southmayd Elementary and Cullen Middle schools will be finished, as well as a list of smaller projects.

As of March 31, more than $1,044,546,922 of the approved work in the 2007 bond program had been committed. In total, the program has included more than 180 projects with the goal of renovating and repairing aging facilities throughout the district to address safety concerns, accessibility requirements, and deferred maintenance issues.

Meanwhile, committee members learned that the 2012 bond program continues to stay on schedule and on budget.

The majority of Group 1 projects are moving out of Schematic Design and into the Design Development state of the design process. Preparation of Construction Documents for several of the Group 1 projects has already started, with all projects to be in that phase by the fourth quarter.

Committee members asked questions on a variety of topics, from the impact of rising construction costs to transition plans for students whose campuses will be impacted by bond work.

HISD Chief Operating Officer Leo Bobadilla told the panel that project costs are being carefully scrutinized by architects, program managers and construction managers to ensure they align with budgets. In addition, transition plans are being formulated in conjunction with academic officials to minimize any potential disruptions to students while the new schools are being constructed.

One key component of all the bond work to date has been community engagement. During the first three months of 2014, the bond team held 16 community meetings at the Group 1 schools. Another three were scheduled in April.

In addition to the promotion of the meetings, staff has been busy working with the Project Advisory Teams to showcase their important work in videos and articles that can be shared with the wider Houston community.