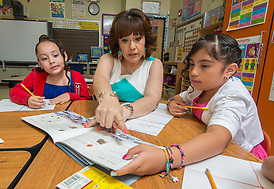 When Sharon Samuel first moved to the United States as a nine-year-old, she was terrified that her limited English skills would prevent her from making friends and succeeding in school. But a positive experience with her very first teacher here not only helped to quell her anxieties about fitting in but also set the stage for her own career in education.

“Mrs. Barrientos is the reason why I became a bilingual teacher,” said Samuel, who was named the Bilingual Teacher of the Year for 2014 by the Houston Area Association for Bilingual Educators. “She consistently went out of her way to make me feel comfortable, not only as a student in her classroom, but also as a young girl living in the U.S. for the first time.”

It is the memory of that teacher’s encouragement which propels Samuel to provide the same degree of reassurance to her students at the very school she attended: J. P. Henderson Elementary School.

“Just as I experienced degrees of inadequacy as I began my journey in U.S. schools,” said Samuel, “culturally diverse students may experience self-doubt and uncertainty regarding their ability to progress academically. [But] students must believe in themselves. All students can and will be successful, and students need to be reassured of this often.”

Samuel, a 12-year teaching veteran who was also named Bilingual Teacher of the Year at the campus level in 2006, emphasizes that educating parents is also a critical part of her job.

“In our global society, being bilingual and bi-literal is an asset, especially as it pertains to the workforce,” she said. “Bilingual educators [know] how meaningful it is for students to be able to speak to…elders, who may only speak the native language, and to other contacts, who may only speak English. Our intention is not for students to abandon their native language, but rather, to develop their native tongue while acquiring a second language.”

Samuel was formally recognized at a special ceremony held May 3 at the University of Houston Hilton.

1 thought on “2014 Bilingual Teacher of the Year now serves at the first U.S. campus she attended”