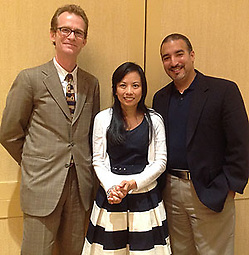 Rowena Verdin has been finding innovative ways to do her job since practically the minute she stepped onto the Milby High School campus. After only a year of fielding requests for copies of old yearbooks from dozens of alumni, she launched an effort to digitize them for easier access. And to entice students to read more, she set up her own version of the Red Box movie-rental kiosk in a display window, adorning popular books with bright red covers that say, “Have you ‘red’ any good books lately?”

It is these efforts and more that have earned Verdin the title of HISD’s Librarian of the Year for 2014.

“Rowena is not just someone who guards books in a room,” explained Title I Coordinator Mary Smith, on her nomination form. “She is the person who everyone goes to for anything: solving technology issues, locating resources, understanding assignments, suggesting a good book, or collaborating with teachers to supplement their curriculum.”

Smith noted that students love spending time in the library now, after Verdin created a small café-like setting there complete with a hot chocolate/coffee machine, table, and three comfortable lounge chairs. “She wanted the library to be a meeting place, not a hallowed catacomb of silence and musty old books,” said Smith.

Verdin first joined Team HISD in 2000, as a teacher at Dávila Elementary School. She transferred to Bonner Elementary in 2004 and eventually became the librarian there in 2007. In 2009, she began serving as the librarian at Milby High School.

Verdin was formally recognized during a special ceremony held on May 17 at the University of Houston Hilton. The award is co-sponsored by the Houston Association of School Librarians and HISD’s Library Services department.