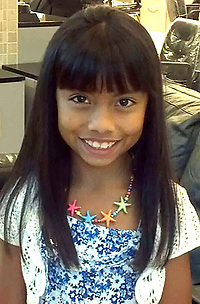 Natalie Nichols has seen a lot of tragedy in her short life. Given up for adoption by her dying mother when she was just four years old, she lost both her mother and her younger sister in Guatemala before being adopted by a couple from the U.S.

Assimilating to life in a foreign country is a formidable task on its own, but that hasn’t stopped the plucky Helms Elementary fourth-grader from taking on additional challenges. Natalie wants to excel academically as well—and now, she has done so—earning a perfect score on the math portion of the recent STAAR exam.

“I think students should work hard and always be inspired,” said Natalie. “My teacher, Mrs. (Tanya) Vetter, is very inspiring. When she told me that I made a perfect score on my math STAAR test, I was so happy. To achieve a goal like this is truly amazing.”

In addition to the perfect score she received on the math portion of the STAAR, Natalie earned “Level III” status for advanced academic performance in both math and reading. She also received a new iPad from her teacher for showing the most growth over the year.

“To say that Natalie is talented is an understatement,” said Vetter. “She’s amazing. This child still believes in excellence. She always wants to know more than everybody else.”