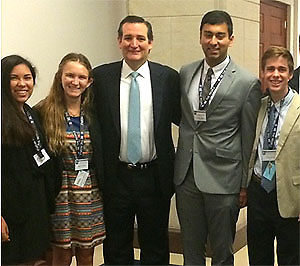 If Bonnie Sullivan still wasn’t sure about her plans after graduation, she is now.

Bonnie was one of four rising seniors from Carnegie Vanguard High School (and only 100 from around the world) to participate in a summer school program recently in the nation’s capital, and her experience there only cemented her desire to pursue a career in politics.

“I did it because I thought it would be interesting,” she said. “But being in D.C. and meeting policymakers made me realize it would be something I’d enjoy.”

The three-week camp was sponsored by Junior State of America (JSA), which offers the summer program at a number of prestigious institutions, including Princeton, Stanford, and Georgetown, where Bonnie stayed.

As part of the experience, Bonnie and her peers got to receive college-level instruction in government, visit the Pentagon, and meet representatives from the Japanese and Saudi Arabian embassies, an official from the World Bank, and even U.S. Senators Ted Cruz and John Cornyn.

One of the things that surprised Bonnie most was how accessible the legislators were and how much influence one person could have. “Representative Rodney Davis from Illinois gave us a nighttime tour of the Capitol, and we got to sit in the seat of both the House and the Senate, something most people don’t get to do,” she said. “We also got a private tour of the Supreme Court the day after the Hobby Lobby ruling was handed down.”

For more information about how HISD is preparing students for college and careers through similar programs, please visit the Linked Learning website.