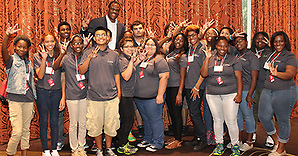 Twenty-five students from HISD three high schools spent their part of their summer getting a sneak peak into what their future may look like, and will continue with a one-year internship.

The students, who attend Davis, Jordan and Worthing high schools, were selected to participate in the Admiral Hospitality Scholars, an internship program which was founded by former San Antonio Spurs star David Robinson.

Part of the program included a three-day camp at the University of Houston’s Conrad N. Hilton College, where the students created their own restaurant concept that included a menu and a marketing plan. They presented their concepts to the NBA legend himself and got to pose for photos with him.

“The hospitality industry is one of the largest providers of jobs in the world and is globally diverse by nature,” Robinson said. “Admiral Hospitality Scholars will expose Houston’s diverse student population to the industry at an age when they’re seeking to define themselves and give them a glimpse into the types of opportunities that are available if they elect to pursue the hospitality path.”

While at UH, the students also toured the campus and spent a few nights in the dorms so they could get a taste of college life. They also went on off-site tours of hotels and restaurants.

The students will be matched with a mentor from the hospitality industry and complete a one-year internship at a local Hilton hotel. If the participating students decide to pursue a career in hospitality, they’ll receive some financial help from Admiral Capital Group to pay for their education.

This was the second year of the Admiral Hospitality Scholars program. Two dozen HISD students participated in the inaugural year, including six of the students who were involved in it this summer.