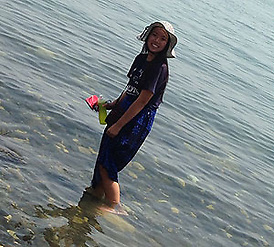 Eight current and former HISD students got the trip of a lifetime recently, after spending four weeks in Israel courtesy of the Mickey Leland Kibbutzim Internship.

Students from Carnegie Vanguard High School (CVHS), the Houston Academy for International Studies (HAIS), Reagan High School, and Yates High School won eight of the ten spots available in the program, which is open to both rising seniors and recent graduates from Texas’ 18th Congressional District.

“The trip was more exciting than scary,” said Reagan High School’s Sophia Reyes. “I know that probably sounds crazy, with the war going on, but that was the reality. Employees still went to work, children still went to camp, tourists still went on tours, and people still lived their lives. I expected people to be living in fear, but I was wrong.”

“We haven’t seen any signs of the war at all,” added Lester Rodriguez (HAIS). “We’ve all been affected in our own way, but every day is another adventure.”

Over the course of their trip, the students experienced life on a kibbutz (a collective community known for growing its own food), went swimming in the Dead Sea, and toured a number of sites with religious significance for Jews, Muslims, and Christians.

“One of the most surprising things was the amazing quality and taste of their fruits and vegetables,” said Reyes. “People there find those more appealing than the local McDonalds or fast foods.” 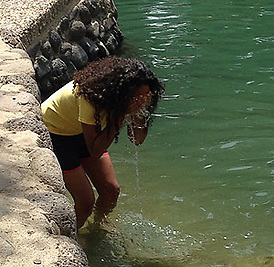 Rising senior Daniela Mengesha (CVHS) washes her face in the Jordan River, where Jesus was said to be baptized.

A highlight of the trip for several students was a night spent in the desert with a family of Bedouins.

“We stayed in a tent, rode camels, and saw the most amazing thing you can’t see in Houston—the stars,” said Reyes. “Desert stars are like no other stars, and we sat there for hours, just staring at the night sky.”

A number of HISD schools and programs encourage students to take advantage of travel opportunities like this one to expand their sense of global citizenship and expose them to different cultures.

The late Congressman Mickey Leland and his close friends, J. Kent Friedman and Vic Samuels of Houston, founded the Mickey Leland Kibbutzim Internship Program in 1980. Leland traveled to Israel in 1979.