In this edition of I Am HISD, which features district students, graduates, employees, and other team members, we talk to the new Manager of Energy & Sustainability Kellie Williams about how her experiences at Fort Bend ISD will impact her decisions here, which sustainability efforts are already afoot in the district, and what’s on the horizon for HISD in terms of “green” initiatives.

You joined HISD in May as the new manager of Energy & Sustainability. What is your vision for that department in the years ahead? 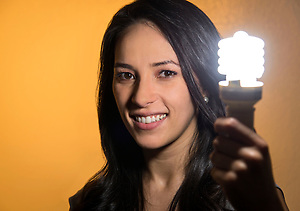 I’d like to see HISD become the leading K–12 entity in environmental stewardship, to participate in several energy initiatives, and to achieve national recognition for outstanding performance.

We’ll also be rolling out a new energy master plan, and bringing in some consultants and engineers to identify and address deficiencies starting this year with a really aggressive approach. They’re going to be collecting data first, such as utility usage and window-to-wall ratios, then gather boots-on-the-ground types of facility information, such as light levels, temperature, and humidity readings. The goal is to complete a thorough investigation and identify opportunities for savings.

As of July 2013, HISD had 17 LEED certified schools and 13 more campuses with certification pending. Have those figures changed since that time, and what are the district’s short- and long-term goals in that area?

My goal is to recognize each campus for energy performance or improvement. Currently, the LEED buildings are only coming from the bond side of HISD, but as part of the energy master plan, we will be seeking either LEED or Energy Star certification for existing buildings, too; and if a building doesn’t qualify for either one, we’ll at least try to bring recognition for overall improvement.

HISD’s Transportation Services department has been recognized numerous times for its sustainability practices, such as efforts to reduce emissions by switching to biodiesel or propane-powered buses, and the implementation of a no-idle policy. What other efforts are underway in the district that people might not know about?

We’re going to be rolling out an exciting new energy challenge on Oct. 1, in which campuses compete against each other to reduce energy consumption. We’ve partnered with the National Wildlife Federation’s Eco-Schools program, and campuses are eligible to win up to $1,300 in incentives at the end of it, which is March 1.

We’re also talking about purchasing green power through the next electricity Request for Proposals (RFP), and we have retrofitted classrooms with LED lights and made a myriad of capital improvements. Particularly in cases where it’s something that needs to be updated anyway, we are using high-efficiency replacements, and the bonus is, we actually receive an incentive from CenterPoint for doing that.

In your last position at Fort Bend ISD, you served as the HVAC and energy manager. How will that experience help you in your new role here?

At Fort Bend, we received recognition from the Environmental Protection Agency for a 20 percent or more reduction of energy use at three schools in a single year using low-cost or no-cost strategies, and as a district, we went from being one of worst-performing in the Houston area to one of the best.

I was brought here to implement the same types of strategies in HISD, but here I feel like we’re better equipped to make a bigger impact. We’ve built a really strong team of engineers, consultants, and stakeholders to address deficiencies within the district. I’m excited.

What trends have you noticed lately that you would like to bring to HISD?

I would like to increase the awareness that each student and employee has on our collective usage. I envision kiosks at every school showing real-time energy consumption, that’s translated into something meaningful, like how many trees were saved.

When you hear, “Oh, that saved a kilowatt of power,” nobody really knows what that means. I want people to have this at their fingertips, so they can see what their school is doing and what their “spend” is. I think it’s important to be transparent to the community. It makes us accountable, and I like having that information available.

I know you’ve only been here a few months, so you’re still getting your feet wet, but if you could communicate one thing to stakeholders about HISD’s energy and sustainability programs right now, what would it be?

That this is just the beginning. We are about to roll out some very big initiatives that foster student and employee participation. It’s a rare opportunity where everyone can become a leader in environmental stewardship. We’ll be empowering them with information to challenge each other to reduce HISD’s energy consumption. It’s a big culture shift we’re embarking upon.