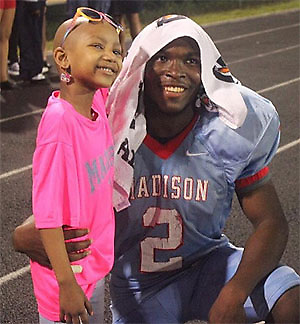 Young Khrystin “Kyssi” Andrews has been getting a lot of attention since her mother waged a social media campaign to obtain a much-needed medical test for her daughter in 2012.

Last week, the three-time cancer survivor went on a dream date with “Prince Charming” in honor of her sixth birthday, and on Oct. 17, she was named the honorary team captain of the Madison High School Marlins during their homecoming game against the Austin High School Mustangs.

“Kyssi’s mother is an alumna of Madison,” said Assistant Principal Rufus Singleton, “and our volunteer statistician, alumnus Bruce Allen, is friends with her. He thought it would be a great idea to invite Kyssi to speak with the team before the game, since October is Breast Cancer Awareness Month. She came to the game straight from chemotherapy, and she just brought everyone to their knees.”

Kyssi is currently facing her fourth bout against that deadly disease. She is receiving treatment at M.D. Anderson.