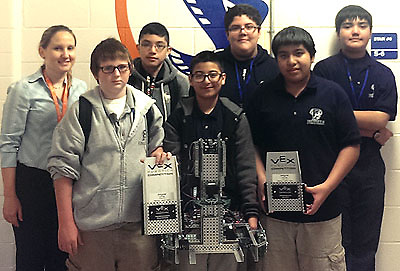 The fledgling robotics team at Fonville Middle School might be relatively new, but that doesn’t mean its members don’t know a thing or two about how to win a competition.

“We have seen the robotics team grow not only in technology skills, but also in ancillary skills like social interaction, team work, presentation and leadership, which are critical for students’ future entry into high school and college,” said technology teacher Vania Willms. “The Falcons Legend team made a remarkable first impression by qualifying for the state competition.”

Willms added that the Oct. 18 competition marked the team’s first VEX tournament experience and its first foray into HISD robotics.