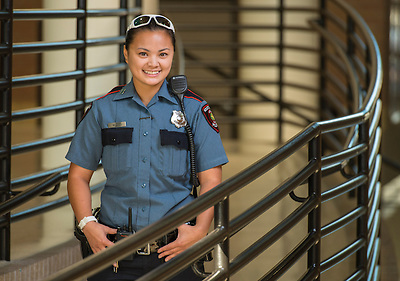 It’s been several months since Minhnguyet “Nicky” Tran was sworn in as a police officer for the Houston Independent School District Police Department. Currently working at Chavez High School, the University of Houston graduate made history by becoming HISD PD’s first female Asian police officer. Tran says she remains committed to community policing and in keeping students and district employees safe on a daily basis. She talks about who inspired her to join HISD PD, and some of her experiences since joining the only accredited public school district police department in the nation.

How are you adjusting so far?

I like it. Before you become a police officer, you have to be a peace officer. So, the way I present myself and that I’m always cheerful, I’m more approachable to people.

What were you doing before you became a police officer?

I was actually a pharmaceutical sales [representative].

That’s kind of a big change! Would you say it’s been a major difference or change since you became an officer for HISD PD?

Yes, a lot of people approach me more now, and I guess it’s the uniform. Sometimes, students don’t like to approach officers because they may think that they’re in trouble or going to get arrested. But for me, I can talk to them about daily activities and ask, “How’s your day?” or, “You look nice today!”

Tell me what a regular school day is like, or maybe there’s not necessarily a “regular” day?

There’s really not a regular school day. I don’t like it when people say it’s a typical day. You always have to be alert but friendly at the same time. Every day is different.

Who would you say influences you?

Well, my brother (Sgt. Tridung Tran) is a police officer. He’s probably one of my biggest influences. He’s a patrol sergeant [for HISD PD].

How is that? Is there any sibling rivalry?

Yes! There’s always some sibling rivalry because he’s older, so he has that authority figure over me because I’m younger. And when we go to work, he still has that high stance, but it’s more firm because he’s a sergeant. I respect him for that.

Is he the one who talked you into joining the department, or did you look at him and know it was something you could do?

He always says I’m friendly and I need to be more forceful. He introduced me into policing because he said the department is about community police. We can be firm, but since I have a nice attitude, people would approach me a lot better and that would work out for me.

I heard that you broke your leg when you first got into the department. What happened?

I was working at Worthing High School. I was trying to shoo some pit bulls on our campus away from our students and construction workers. I had my baton ready. So, I’m shooing them away, but the ground was unleveled because it was a construction zone. And then I tripped and fractured my foot. I was out for about three weeks on light duty, but I’m strong! I went back to Worthing to work even more.

Do you ever feel there’s pressure being the first Asian female police officer in the department?

I have to give a higher presence and better demeanor. I’m a stepping stone for a lot of people. A lot of female students here [at Chavez] see me and come up to me asking how I became a police officer because they’re interested. They’ve never seen a female police officer so vigilant.

What one piece of advice would you give to a student at Chavez that may be interested in getting into law enforcement?

I would say you have to be active. You have to be tough because it’s very demanding. The way you talk and speak, people may judge you, so you have to be careful. Your presence is important because how you act towards people, that’s what they see in you.

Do you have any future aspirations as far as your career in law enforcement?

I’m going to stay in law enforcement because I like the community policing that we do. We’re more involved with the students, community and parents. What we do reflects on how the parents see us as officers.