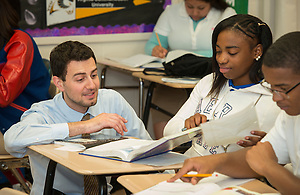 When Adeeb Barqawi first started teaching during the 2012–2013 school year, he had no idea how quickly success would come to him.

But in June of 2013, he was named the Alternative Certification Program Teacher of the Year for the entire State of Texas, and the following February, his approach to instruction was highlighted in a Breakthroughs feature of the district’s eNews publication. This led to accolades from the mayor and Houston City Council in April of 2014, and now, the high school physics instructor is hoping the combination of his teaching philosophy and his students’ achievements will bring him recognition on the national stage.

Barqawi is one of three HISD educators nominated for the TNTP’s Fishman Prize for Superlative Classroom Practice by Elementary Curriculum and Instruction Officer Lance Menster. The award recognizes exceptional teachers working in high-poverty public schools and comes with a top cash prize of $25,000.

“I am excited about applying and will be doing it,” said Barqawi. “I plan on sharing my focus on culturally responsive pedagogy with the judges.”

Since Kashmere High School treasures music, explained the third-year educator, he arranged his room to highlight a musician whose work both he and many of his students enjoy — Prince — and adorned its walls with the biographies and photos of other successful people of color.

“I want to give my students true hope and achievable targets,” explained Barqawi. “Even though I reference Barack Obama and Martin Luther King Jr. often, my students have to realize that there are other individuals closer to home who can serve as role models, too.”

If you are a teacher with superlative practices to share, you can apply online without being nominated. If you know someone who should apply, submit their name here.

The deadline for all applications is December 16, 2014.