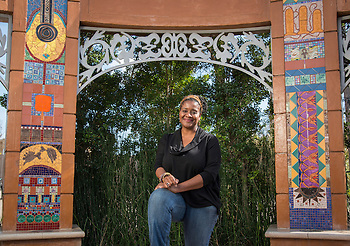 In this week’s edition of I am HISD, which features district students, graduates, employees, and other team members, we speak with Lamar High School graduate Marsha Dorsey-Outlaw about how she became a professional artist, what compels her to work with children, and where you can find her next district-related project.

You graduated from Lamar High School back in 1981. How old were you when you first realized you wanted to be an artist?

Art was always a good escape vehicle for me, but it wasn’t until after high school that I knew I could make a living at it. I spent one entire summer touring Western Europe through AIFS and bought art supplies all along the way. I did a lot of sketching and watercolors. At one point, I was in Salzburg and I was out of money, so I wrapped a shirt around my head and told some tourists I was from Tobago, and sold them two artworks. It was a major rush. Later, I was at the University of Houston working part-time as a travel agent, and on the side, I was hand-painting clothing and had a lot of commissions and consignments. I think that was the first time I remember knowing that the commerce side of art was possible.

How has your journey as an artist evolved? Did you study art in college?

I did early on, but then I left school and started working. I didn’t go back until I divorced in 2000, but in the meantime, my education was a bit more, shall we say … heuristic. I landed what was supposed to be a three-year residency at the Museum of Fine Arts, Houston, in 1990, and it ended up lasting 10 years. Prior to that, I’d worked with the Texas Commission on the Arts and Michelle Barnes’ Community Artists Collective. Back then, it was just known as Barnes-Blackmon Gallery and was located in the lobby of the Ensemble Theatre. That was a really nurturing community.

The work I’ve seen by you deals primarily with mosaics and murals. What it is about those art forms that appeals to you? Do you work in any other media?

My larger projects are mural installations, which can sometimes be rather ambitious and take several months to complete, although I do love painting and drawing on paper. What I like so much about murals and the way I’ve found I like to do them is molding relief into them. It makes them a lot more animated than a flat mosaic piece.

I’ve always been really interested in the decorative arts, too—like the back of a chair or the curve of a handle on an antique teacup. It’s something about the marriage of form and function, of durability and delicacy at the same time, of being strong yet vulnerable. My mosaic work came about because of a commission, and was kind of experimental at first, but both are a way to tell a story through motifs and patterns without being so literal.

The Collective (Community Artists Collective) mentions your contribution to Peggy Park in the Third Ward, and our photographer’s pictures show you in front of an installation called “Vigango’s Stoop.” Can you tell me a little more about those projects? What was your vision for those?

I’ve always been fascinated by the extraordinary origin of ordinary things, so I tried to add as many of those as possible. In one, for instance, there’s an impression of a stool, which is a common object for a mother to create for her child. And while some people might think of an afro pick as an American thing, the carving of a comb is part of a boy’s rite of passage in certain sections of Africa. None of this stuff is unique to one particular culture, but symbols carry so much weight. Like a kente cloth, some people just bring it out to wear on certain occasions, but at one time, you could read the patterns on those cloths and they would tell a story. People here might be fighting those over there, but have you noticed that these symbols they both use mean the same thing? Art is the common thread among so many cultures.

You’ve worked on public murals with children in New York, served as the program coordinator for MD Anderson’s “Too Cool to Smoke” program, and taught classes through Young Audiences of Houston. What keeps you working with young people?

My mother, in a weird way, put a hex on me. When I was really little, she and my grandmother would babysit a lot, so there were always kids around. My mother was a Head Start volunteer at Blackshear ES, too, and I think her love of teaching must have rubbed off on me, because she told me I was always asking her to hurry up and get me dressed in the morning, because “the kids will be here any moment”—as if I had to get my classroom together! She always said I would be a teacher, and she was right. She saw that in me. I still love to learn and love to share it. I just love that experience of self-discovery, and there’s no better way to see that than in the front row of a classroom. It’s beautiful.

Are you working on anything with HISD right now?

Yes—the SPARK park at Piney Point Elementary School. It’s going to be a series of columns, Greek-inspired. One of the P.E. coaches there is real involved with Marathon Kids, and I just love the whole idea of calisthenics. It respects the human body and conditions the body without the use of machines. Even the word itself is Greek for beauty and strength, and in Greek architecture, the amphorae and hydriai—all the containers used to carry oil and water—depict sports. I’m enjoying it a lot, working with the kids to decide the different forms of exercise to be depicted on them. I’m hoping the park will be finished sometime this summer.

This is the second in a weekly series of articles on HISD artists as a part of Black History Month.