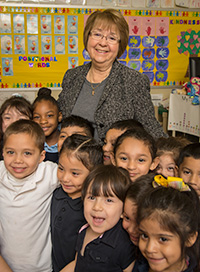 Herlinda Garcia was named “Educator of the Year” by the League of United Latin American Citizens (LULAC) Council 402. The J.P. Henderson Elementary School principal was honored at the council’s annual scholarship gala on Feb. 11, along with former HISD Board President Juliet Stipeche, who represents District VIII and was named “Honoree of the Year.” Also in attendance was current HISD Board President Rhonda Skillern-Jones.

“I have devoted my life to education, and this means a lot to me, because this event is a fundraiser that raises money for scholarships for area students who want to go to college,” Garcia said. As the principal of Henderson for 35 years, she is only the fourth principal in that position since the school was built in 1929.

“I am working constantly to strengthen our neighborhood schools because strong schools have the power to transform neighborhoods,” she said. “In fact, seven of my former students have returned to Henderson as teachers.”

Garcia joined Council 402 in the 1970s when it was a small organization. It has now grown to include prominent Latino and Hispanic business people who contribute generously to the scholarship fund. To date, the council has awarded more than $400,000 to deserving students. Council 402’s mission is to advance the economic condition, education, political influence, health, housing, and civil rights of the Latino population of the greater Houston metropolitan area.

Founded in 1929, LULAC is the oldest Hispanic civil rights organization in the U.S. and was organized to help its members create and develop opportunities for Hispanics.