In this week’s edition of I am HISD, which features district students, graduates, employees, and other team members, Harvard Elementary School third-grade teacher (and former District I Board of Education member) Karla Cisneros talks about how she went from the classroom to the boardroom and back again, the greatest gifts of her experience as a trustee, and if she’d ever consider running for that office again.

You represented District I on HISD’s Board of Education for five years in the early aughts, even serving as its president one year. Now you’re teaching third-graders at one of our elementary schools. How did that transition come about? 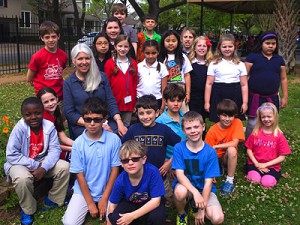 Karla Cisneros with her students at Harvard ES

Well, I was not a certified teacher before. I was just sort of a mom who got pulled in. They hired me at Travis Elementary to be a part-time science teacher, and one thing just led to another. After I left the board, I was going to work with my husband, but I realized I wanted to be back in education at kind of a grass-roots level, so I went back to school and got certified.

And I really, really, really like being a teacher. The best part of all is the kids, but then, that’s always the best part. I knew when my own children grew up and moved on that I was going to hate being an empty nester, but so much of teaching is not just about teaching. It’s about helping usher children through their lives, not just the curriculum.

You have a bachelor’s degree in environmental science and a master’s degree in architecture. And while serving on the board, you were also the business development manager of your family’s firm. Did you ever work as an architect?

Yes, I did. When my husband and I started our business together, it was supposed to be a partnership, but it just didn’t work out. I had a baby playpen at the office, and I was just being pulled in a whole different direction. So I left architecture.

Last August, you celebrated your fifth anniversary back in the classroom at HISD. In what ways have the past five years differed from your previous experience as a teacher? Was there a bit of culture shock at first, diving back in?

Actually, it’s six years now, and I was on the board for six years, the same amount of time. It’s been very interesting. The view from the top is often very different from the view from the bottom, and really good intentions at the top sometimes don’t get down to the bottom where the teachers are.

I guess being where I am now, where the rubber really does meet the road, I value the secure, nurturing relationships children have with their parents more. So many children are in families that are struggling, and it just shakes their world in a way that they don’t feel secure about anything. Teachers fill a very important role, but sometimes they are the only stable adults for these children. I think it raises a lot of questions for our society. And I worry about the country.

Over the years, you have also been very active in the SPARK park program, and you served as its assistant director at one point. What project are you proudest to have been a part of? And are you still involved in that program today? 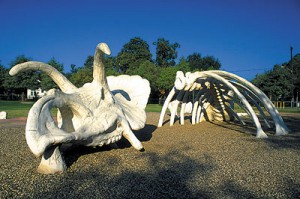 No. I was on the SPARK board for 10 years. They’ve done a wonderful service by combining neighborhood parks and school playgrounds. It’s such a good idea: of children playing in that space during the day, and neighbors enjoying it later.

I think one of the best projects is at Travis, because we wanted the students to design the park. So we gave the children crayons and told them to draw what they wanted, and when we sorted through all the drawings afterward, kids of every age had drawn dinosaurs. And I mean both boys and girls of every age.

Sometimes, you have situations where people say they want community feedback, but they really don’t, because their minds are already made up, but we said, “You want dinosaurs? You’re going to have a dinosaur.” And at the time, there was nothing like that, so we worked with artists Paul Kittelson and Carter Ernst to create a “Travisaurus” that the kids can play on. It is the centerpiece of the park. It’s great.

Clearly, you still believe in the value of public education. Having seen the field from so many different angles now, would you ever consider running for trustee again?

No. (Laughs) I haven’t even considered that. I think it’s someone else’s turn. And I promised my husband I wouldn’t run again.

One thing I had working for me at that time was having children in school. It really informed my opinions. At one point, I had one child in elementary school, one in middle school, and one in high school, and I just felt like I had some insight. But my children are grown now, and everyone’s got a different opinion. The more we can build on that, the better the results are. The more diverse a board you have, the stronger it is.

What do you consider the greatest gifts of serving as a trustee?

My belief and confidence in how important it is for all of us to be physically engaged in what is happening in the world. Those really are American values—that citizens are the ones who make things happen. I think sometimes people forget that. But it’s really important to be engaged in what happens in our world and society. I really feel strongly about that. That’s something we talk about in my classroom a lot, that we’re responsible for what happens.