Katherine Miranda cited for her leadership, compassion, and generosity of spirit 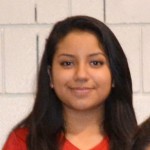 Sharpstown International School (SIS) has among its students an exceptional eighth-grader who epitomizes the quality of character that the Luby’s Achieving Character Together (ACT) program is looking for. Katherine Miranda was recognized on May 28, 2015, during the final assembly of the school year, as Luby’s ACT grand prize winner.

Miranda was nominated by her volleyball coach, Tiffany Sevier, because of her leadership, compassion, and generosity of spirit.

Miranda plays on the varsity volleyball team with enthusiasm and encourages her teammates, especially Nataly Alfaro. Alfaro is a life skills student at SIS, and Miranda has taken her under her wing. During the games, Miranda is on the court next to Alfaro. She does not trespass into Alfaro’s zone to save a play but encourages and coaches her where to stand and when to go for it. The girls on the team have taken Miranda’s lead and view Alfaro as a valued member of the team.

“We are very honored that Luby’s ACT program has selected one of our students,” said SIS Principal Thuy Le-Thai. “We have many outstanding students, but Katherine is a prime example of a person who cares, who recognizes different perspectives, and who transfers those into ideas that make this world a better place. We are very proud of her.”

The Luby’s ACT program recognizes students for demonstrating exemplary character, and as the grand prize winner of the 2014–2015 Luby’s ACT program, Miranda received a check for $2,000, an Apple iPad, and free food at Luby’s for a year.