In this week’s I am HISD, which features district students, graduates, employees, and other team members, Daytime Emmy winner (and Jack Yates School of Communications Class of 1982 member) Kim Gagne discusses when she realized a career in television was her destiny, how she landed her first job in TV, and the journey that took her from covering crack houses on crime beats to producing “The Steve Harvey Show.”

Kim Gagne as a fresh Yates HS graduate in 1982…

You have been in the television business for more than 20 years and are now the supervising producer of “The Steve Harvey Show.” How did you get your start and how did that lead to where you are now?

Well, after graduating from the University of St. Thomas in ‘86, I got an internship at FOX 26 in the Community Affairs Department. The news director, Will Wright, got sick of me begging him for a job. I literally begged him to put me in the newsroom. Every time I saw him in the cafeteria or anywhere, I would ask him when he was going to put me in the newsroom. Finally, one day he told me he had a spot on the assignment desk and that was my start. I knew I had to get a job in that building and I had to get that job or any job at FOX.

From there, I became a managing editor and started the show “City Under Siege.” It was “Cops” before there was “Cops.” We would go into crack houses and put wanted fugitives on the air. It was really groundbreaking and it resulted in a lot of bad people being arrested.

Later, I left FOX and went to Channel 11. I started as an associate producer and worked my way up to producer. Then I started a consumer division called “The Defenders.” Reporter Eileen Faxas and I went after bad guys much like Marvin Zindler did at Channel 13. That was probably my most satisfying job in the newsroom, because we helped people. Once we got $94,000 back for this couple that had been sharked by this company. They were so grateful; it was their life savings.

After my daughter was born in 2000, I left Channel 11, and went to work in court TV. I did a show called “Texas Justice.” Eventually, I went back to Channel 11 and started “Great Day Houston with Whitney Casey.” I worked on that show for about three years and left in 2009 to go work on another FOX show called “Judge Alex.” When that show moved to L.A., that was a game changer.

I moved to LA in 2010 to work on “Judge Alex.” It was the first time I had ever left my home to go work. At the time I had three kids, and my husband, Emilian, encouraged me to follow my dreams and see what would happen. After about five months, I was headed back to Houston when I got a call from my friend and fellow Houstonian, Rushion McDonald. McDonald was and is the business partner of Steve Harvey. He asked me to come to Atlanta where they were taping a new show for Centric. Again, my husband encouraged me to go and so I did. I did the show and lived in Atlanta, traveling back and forth on weekends. After a year, I left Atlanta and came home to Houston. 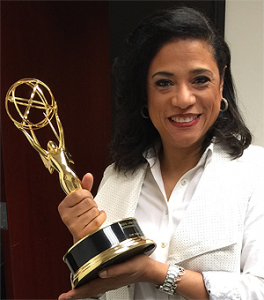 …and today, with one of her Daytime Emmys

After being home for a year, I got another call from Rushion and he asked me to work on the pilot for a talk show that NBC wanted Steve to do. I did. I went to Connecticut to do the pilot and after that went home. About three months later, the show was picked up. I asked where we were shooting it, and they said, “Chicago.” I asked my family, “Who wants to move to Chicago?” And no one raised their hands. So off I went, and my husband stayed here and held down the fort. It’s been three years, and we are now heading into our fourth season.

Did you always plan to go into television? Who or what inspired you to take this path?

You just won your second national Daytime Emmy award, and you’ve previously won one regional Daytime Emmy. It seems somehow appropriate that your last name is a derivative of the verb “to win” (gagner) in French. What was it like winning this most recent award?

The Emmys were held in April, and this year I was able to go. I didn’t go the first year because it was at the same time my daughter graduated from high school, and I promised her a trip to New York as a graduation present. So being able to be there and experience it with my co-workers was so much fun. We had a really good time. The night of the Emmys was awesome. It was on the Warner Brothers lot, and I got to see and interact with some of my favorite celebrities. I am a huge “Young & the Restless” fan, so seeing my soap stars up close was fun.

When we won the second time for Outstanding Talk Show Informative, that was great, because that means everyone who works on the show was a part of that win. It was awesome.

What is your favorite thing about working on “The Steve Harvey Show”?

I have a team of seven people, and they are all women. They work really hard, and I appreciate how dedicated they are. I also love that we take an idea on paper and bring it to life. To see it all play out is still exciting to me. When the bookings are great, the graphics look great, Steve is on point, and it all comes together – that’s a great feeling.

How have the skills you learned at Yates School of Communications served you?

I am a product of HISD. I went to Concord Elementary in Fifth Ward, Hamilton Middle School in the Heights, and Yates in Third Ward, so I have been all over Houston getting an education. Yates’ magnet program was the first time I realized that what I wanted to do with my life was possible. I thought, “This is not crazy. I can achieve this.”

The magnet school was in its infancy, and the teachers were so dedicated. We learned about TV, radio, film, photography, it was pretty amazing. I had the best experience in high school and made lifelong friends. Every day, I couldn’t wait to get to school to see what foolishness we would get into.

What advice would you give your high school self?

I would tell her that her that hard work will pay off. I would tell her to live in the present and don’t let fear stop her from doing anything. That haters are like the air you breathe; they are everywhere. Not everyone will want to see you shine, but as long as God has it for you, no one can be against you. Believe in God and believe in yourself.