In this week’s I am HISD, which features district students, graduates, employees, and other team members, José Saenz explains why he just can’t stop coming back to his high school. Saenz attended Austin High School and participated in the school’s teaching program. He graduated in 2003, and is now a teacher there. Given the fact that he also met his wife there in the ninth grade, it is clear that for Saenz, all roads lead to Austin. 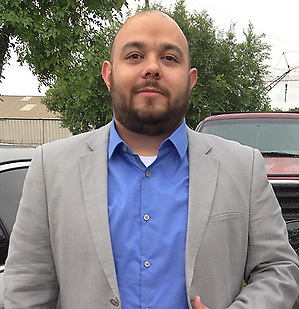 You graduated from Austin HS in 2003, and you have returned as a teacher. What did you do after graduating, and what brought you back?

I had made up my mind to become a teacher towards the end of my senior year. I began attending the University of Houston in the fall of 2003 and majored in history. I went through the education program at UH as well. Students were required to do a set number of observation hours and a semester of student teaching. I requested Austin as the location for both. Since graduating, I was very interested in coming back to Austin to teach and having the opportunity to student-teach there helped me make that decision. I felt that I could connect with the students coming from the same neighborhood and having many of the same life experiences. I began working at Austin in 2008 and even returned to UH while working in 2010 to obtain my master’s in curriculum and instruction in social studies education.

While you were at Austin, did any teachers serve as role models?

There were a few teachers at Austin who served as role models and really helped me correct a lot of the bad habits from middle school that got me in trouble. I think as a teacher, I have borrowed and blended many of the strategies that those teachers used with me, as well as strategies I have learned over the years to help me try to become the best teacher I can possibly be.

Why did you decide to be a teacher?

Initially, I was going to attend Texas A&M; I had already been accepted to their engineering program. While doing my internship at Cage Elementary for Austin’s magnet program, I was introduced to a teacher who had been an engineer and quit that profession to become a teacher. He told me that the most important thing to remember is to pick a career you enjoy and not one simply for the money. He said he hated waking up every morning when he was an engineer and how that changed when he became a teacher. The more I thought about it, the more I realized the only reason I wanted to pursue engineering was because of the potential money to be made. I also began to think about my time in school and some of the challenges I faced. I was not the best student in middle school and often in trouble. I had teachers tell me that I wasn’t going to accomplish anything and that I had such a bad attitude that I would never be successful. Thinking back on these things motivated me to want to become a teacher and not only prove those people wrong, but to have a chance to have a positive impact on students just like myself.

You have taught social studies and history at all grade levels. What is your favorite thing about teaching?

If I had to choose my favorite thing about teaching, it would probably be connecting with students and having an impact not just on their views of academics, but on their outlook on life in general. When students feel comfortable to talk to you as a teacher about their problems, life goals, and ambitions, it feels nice to know that they trust you and have enough respect for you that they want your guidance. Since I come from the same background as many of the students at Austin, I feel an obligation to try and help as many as I can, not just academically, but in their personal lives as well.

It’s not easy to be a successful and effective teacher. What core value has served you the best in your journey from student to teacher?

Respect. The idea of mutual respect has been a constant core value that has served me very well. Many of the teachers I took issue with as a student expected respect without giving it back. When I became a teacher, that was one thing I told myself I would not do. I always opened the very first day of school with a speech on mutual respect. I tell students that I will always treat them with respect and I expect that same respect given in return. Especially in high school, students feel like they are “adults” and want to be treated like one. I find that many times, if you show them the same respect you would want when you talk to them, they respond in a positive manner. I think the idea of mutual respect is one of the biggest reasons why I rarely have any classroom management issues.

What is the best memory or moment you associate with Austin?

Meeting my wife when I was in ninth grade.