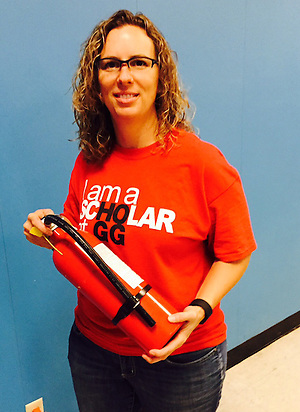 Hogg Middle School Principal Angela Sugarek used the fire extinguisher training she received through HISD on Aug. 7, when she witnessed a fiery crash while on her way to work.

Sugarek said a driver slammed into the back of a truck that was preparing to turn, and she stopped to make sure everyone was OK.

“I saw that one of the drivers was still in his car, and that the engine was on fire,” Sugarek said. “I helped another witness to get a car door open so that the driver could get out.”

A driver in a large truck also stopped to help. Sugarek asked him if he had a fire extinguisher on board. He handed it to her and she knew exactly what to do, thanks to training she received through HISD.

“I had a flashback to the HISD training and remembered PASS – Pull, Aim, Squeeze, and Sweep,” Sugarek said. “I ran to the car, pulled the pin, aimed the hose at the fire, squeezed the lever, and swept the hose back and forth until the fire was out.”

Thanks to Sugarek and the other witnesses, both drivers survived the crash and none of the rescuers was hurt. After giving a statement to police officers, Sugarek continued to Hogg to start her day.