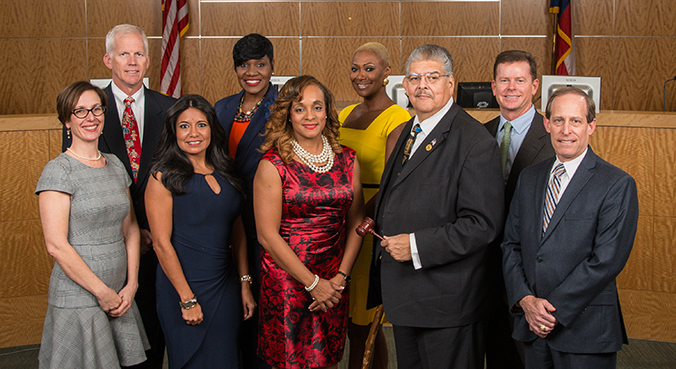 January is National School Board Recognition Month, honoring the men and women who serve on the nation’s thousands of Boards of Education. These dedicated public servants become school board trustees because they are committed to improving public education and their communities.

Our board members devote many hours to making sure Houston’s schools are safe and have the resources and instructional programs needed to educate children to their fullest potential.

“The students in HISD are very fortunate to have dedicated board members who work day in and day out to shape policies that support a high-quality education for all of our students,” said HISD Superintendent Dr. Terry Grier. “If you haven’t reached out, please thank your school board trustee for caring about our children, and let them know that they truly are appreciated for what they do.”

The nine members of HISD’s Board of Education serve staggered four-year terms—and, unlike their peers in other cities, they serve without pay. Trustees are elected from separate geographic districts, but as board members, they work closely with each other and the superintendent of schools to improve teaching and learning throughout the entire city – not just in their individual districts.

HISD will have two new trustees joining its board this month. Diana Dávila (District VIII) and Jolanda Jones (District IV) will be sworn in before the first regular meeting of 2016 on Jan. 14. Their biographies will be available online at that time.

The swearing-in ceremony will begin at 11 a.m. on Thursday, Jan. 14, in the board auditorium of the Hattie Mae White Educational Support Center (4400 W. 18th St., 77092). New officers will be elected during the regular meeting that same day.

For more information about HISD’s Board of Education and profiles of its members, visit the Board Channel, or click their names below.