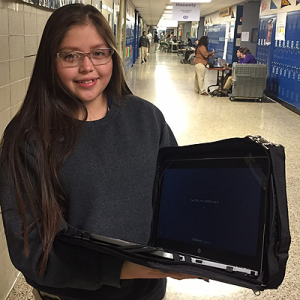 Students at a dozen HISD high schools will soon be making the most of 21st-century technology, thanks to HISD’s PowerUp program. The districtwide initiative to transform teaching and learning enters its third and final phase during the 2015–2016 school year, and students in the last group of 12 high schools began receiving laptops this month for use in the classroom and at home.

Noah Brown, a tenth-grader at Booker T. Washington High School, said he was excited to be receiving the device on Jan. 20. “It will make classwork easier,” he said. “Up ‘til now, I’ve been doing research on my phone.”

Karla Bueno, also a sophomore, said she broke her own laptop, so she had been using computers at the school to complete her studies. “Now, I’ll be able to email my teachers and ask questions [through the HUB] at home,” she said.

Chess and social studies teacher Joseph Cropper called the distribution of laptops “a welcome advancement.” He received his device, along with training on how to use it, last August. “For my students, this will mean a big jump into 21st-century resources, as well as more challenging, interesting, and captivating projects.”