In this week’s “I Am HISD,” which features district students, graduates, employees, and other team members, Sugar Grove Academy social worker Elba Ruibal talks about why she began working in public schools, what compelled her to move from a high school to a middle school setting, and one of the biggest challenges of serving refugee students.

Let’s start with a little background. How long have you been a social worker, and when did you first join Team HISD? 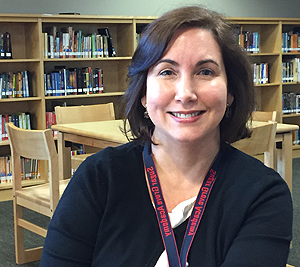 I’ve been in social work for about 25 years. I started out working with domestic violence victims at the Houston Area Women’s Shelter and was there for two and a half years. I also worked at the Women and Children’s Hospital in San Antonio, in the children’s emergency room. I came to HISD five years ago, and was at Westbury High School for four of those. This is my first year at Sugar Grove.

What made you decide to move into public education?

When I had my own child, I wanted to be with him in the summers. But I also dealt a lot with victims of domestic violence at the hospital, and I had to report abuse to Children’s Protective Services. Once those children left the ER, I never knew what happened to them, and thoughts of their welfare lingered. But in a school setting, I get to see those children every day and know that they’re alive. I get to follow up, make sure they’re safe, and in the best cases, watch them heal.

Was there a particular reason that you transferred from a high school to a middle school campus?

Yes. In high school, children are pushing boundaries, trying to become independent, so there can be a lot of friction at home. Once a child turns 17, sometimes the parents say, “You know what? I’ve done my job. You want independence? You’ve got it. You’re on your own.” And the kids don’t have anywhere to go. Their options are so limited. In middle school, you still have the parents. And I thought, “If I could just get to the students earlier, maybe I could help out before it reaches that point.”

This area of town has seen a real influx of refugees from war-torn countries. I imagine some of the children have been really traumatized by the things that they’ve experienced. What are some of the challenges of serving those students?

Our biggest challenge is to accommodate them and make them feel welcome. I try to make eye contact with those kids every day, just to let them know we’re here for them.

Your principal told me the average social worker stops at the child, but that you go the extra mile in getting people food, shelter, and clothing. She also said that where other people see a discipline issue, you see another side to it, and that you are good at getting to the root of problems because you dig deeper. Why is that?

Oh, I don’t know about that (smiles). I just have contacts because I used to work in a shelter. It’s about making sure families end up where they need to end up, in terms of housing or other services, because a lot of them are so overwhelmed. Sometimes I write letters on families’ behalf, because they might not be able to tell the whole story or know how to navigate the system.