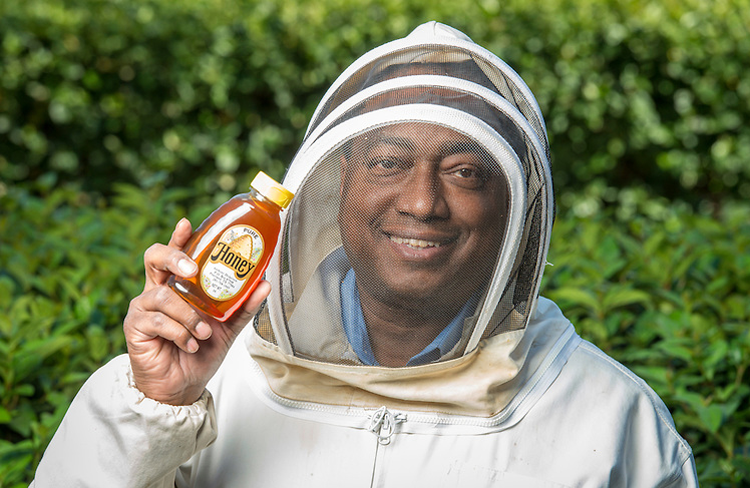 Anthony Dickerson poses in his beekeeping suit with a jar of his own honey.

In this week’s edition of I am HISD, which features district students, graduates, employees, and other team members, Student Transfers Analyst (and 20-year HISD team member) Anthony Dickerson talks about the buzz over his beekeeping, Colony Collapse Disorder, and advice for new members of Team HISD.

So tell me about the beekeeping. How did it start?

Well it’s kind of complicated. We have a house out in the country, and I noticed there was a buzzing in the walls. We found out there was a colony of bees that had infiltrated the house. I did what most people would do and called an exterminator.

The guy came out and sprayed, but by knocking on the walls he could tell how large the beehive was and that it had been there for a while. So he said “They’re gone now, but the comb is still in there and their pheromones are there. So if a swarm of bees comes by again and smells that, they may try to nest again.”

So he closed up the area where they were coming in and I sort of forgot about it. About a year and a half later, another swarm came by and, even though they couldn’t get in, decided to make combs on the eaves of the house. And I looked at it up-close for the first time — at how the combs were built — and I was blown away by how perfectly they were constructed.

And that made you decide to capture them?

So my first plan was to figure out how to get the comb off the eaves and into a box, and maybe have my own little hive colony. I started reading up on it and the more I read about them, the more fascinated I became. I joined a beekeeping association and started going to meetings. In the meantime, it was taking longer and longer and I wasn’t learning enough to know how to remove a beehive. Unfortunately, I had to call someone out there to get those bees.

Finally, someone said they had a deal with a bee breeder, if I wanted to buy some bees. So I picked out a spot, got a stand. At first, it was hard-going, but after the first year, it was easier. I was still learning about bees. A lady asked me if I could keep a beehive on her property. So now I have two places that I keep bees. They began producing honey. One thing led to another.

It’s a lot of work. There’s a lot of heavy lifting. A box full of honey could weigh anywhere from 40 to 100 pounds, depending on the size of the hive. You have to go in and treat them for mite infestations and hive beetles, and you have to make sure they have enough to eat during the winter months. They don’t always store enough to sustain themselves.

But when you have your extractor and you open it up the first time and that honey starts flowing out — or that first time you fill your jar up with your own honey and look at it gleaming and golden — you get that satisfaction, that sense of accomplishment. It’s something you don’t feel with many things.

Well, you do get stung and some people are really afraid of that, which is the reason most people say they do not get into beekeeping. There have been a couple of times that I’ve thought “Maybe I’m in the wrong hobby. Maybe they’re trying to tell me something. Let me walk this off …” (laughs) But I think the benefits outweigh the liabilities.

What are your feelings about the sudden lack of bees and shrinking honeybee populations?

It’s called Colony Collapse Disorder. I have lost some hives. It happens. We’re keeping an eye on it. I think it’s pesticides. It mostly affects commercial beekeepers who transport their beehives from one place to another. Amateur beekeepers…we pretty much spoil our bees.

You may be the only beekeeper in all of HISD’s Central Office.

I might be! (laughs) And probably one of the few African-American beekeepers.

Do you tell many people about the bee interest?

What do you do here at HISD?

I work in Student Transfers. I’m a transfers analyst. I process the paperwork for students who wish to attend a school outside their attendance zone, or attend a magnet program. I also do the determination of residence for a minor — which you have to have if you enroll a child in a school and you’re not the biological parent or legal guardian.

What’s the best part of your job?

Getting a kid into a school where they will really excel and where they’re happy. It’s not that one school is “better” than another, it’s just that this child may do better in this school.

What’s the most challenging part of your job?

Hmmm…maybe just the sheer workload. There are three of us handling the entire district.

What advice would you give someone who is just coming to Team HISD?

Ask a lot of questions. Take in a lot of advice. All of these departments are like a big family.

8 thoughts on “Student transfers analyst moonlights as a beekeeper”