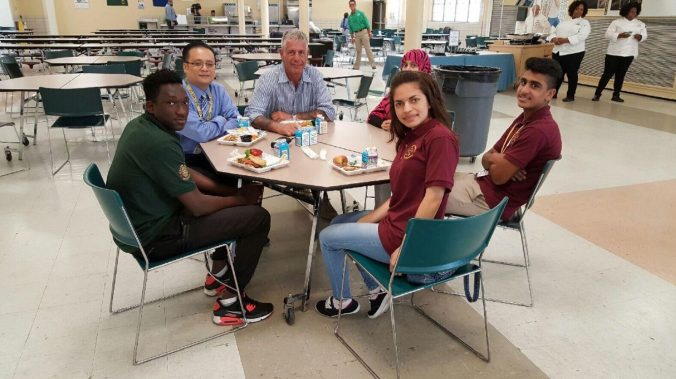 Nearly two years ago, Wisdom High School Principal Jonathan Trinh was featured in a local newspaper story about adults who immigrated to the United States as a child and how they adjusted to life here.

So when producers for Anthony Bourdain’s show on CNN, Parts Unknown, were doing research for their upcoming show on Houston, they read the story and wanted to include the Trinh family.

Sylvia Trinh, Director for North Area Schools and Jonathan Trinh’s wife, said she was happy to be included in the show and talk about the positive aspects of living in Houston and being involved in the education of students who have similar backgrounds as her family. Parts Unknown aired at 8 p.m. Sunday on CNN.

When Bourdain visited Wisdom High School and the Trinh family household earlier in 2016, he spent much of his time visiting with students, watching instruction in an ESL classroom, and even had lunch from the school cafeteria.

Later in the evening, he went over to the Trinhs for a Vietnamese-style crawfish boil (from Jonathan’s family), and tamales and pupusas from Sylvia’s El Salvadorian background. And while he enjoyed the food, Sylvia Trinh said Bourdain was even more impressed with the students and teachers at Wisdom High School.

“We were both extremely excited (to be on the show),” she said. “It was a chance to highlight and change people’s minds about inner city schools, their amazing teachers and staff. We often overlook them because sometimes they get overshadowed by negative headlines. I’m glad (Bourdain) spent a good chunk of time in an ESL classroom.

“He was really moved by the focus on academics, because he’s visited the places where a lot of these refugee students come from and knows how difficult life can be. He empathized with them, and really enjoyed talking to them. He said it was one of the highlights his trip.”