HISD Police Sgt. Adolph Saenz could barely hold back his emotions after walking into a surprise retirement celebration on Monday afternoon. 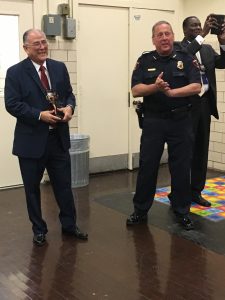 “I’ve worked with so many of you all for these years and it’s like family,” Saenz said to a room filled with 50 well-wishers. “I’ve spent more time on the job than I have with my own family, and I appreciate each and every one of you. I’ve got beautiful memories and I appreciate you all being in my life and you’ve made a difference in me.”

After 41 years with the department, Saenz is saying farewell to the nation’s only accredited school district police department, but not without a lot of soul-searching.

“I wrote my letter all the way in July, and I always would change the date,” Saenz said. “The day I decided to do it, I was walking down the hallway knowing that was the hardest thing in the world for me to do.”

Saenz began working for the district in 1975 as a part of the HISD Security Services Patrol division. Throughout his time with the department, Saenz was assigned to the divisions of Investigations, Campus Operations, Special Projects, Research and CALEA, and Internal Affairs. He created the Gang Education Awareness and Resistance program (G.E.A.R.) and helped develop the first Gang Intervention unit for the district’s Police Department.

“You will be missed, but we want you to enjoy yourself and not worry about this place,” HISD Police Chief Robert Mock told Saenz. “You’ve earned it and deserve it.”

Saenz’s dedication to working with communities on youth gang-related issues has earned him numerous awards and commendations, including Officer of the Year by the Texas Municipal Police Officers Association in 1994. In addition, he is a former trainer for HISD PD and a 2010 graduate of Sam Houston State University’s Leadership Command College.

With retirement, Saenz will have the opportunity to spend more time with his wife Josephine, three daughters and six grandchildren. He says his love for training HISD police officers, protecting the district and community is what he will miss most, along with influencing children in a positive manner and serving as s mentor to officers.

“I have nothing but wonderful memories and it may be insignificant, but I believe I played a part in the development of the department and it continues to grow,” Saenz said. “We’ve been able to maintain the standard that has kept our community and students safe, and now I believe administration understands how important our job is.”