Fifteen uniformed men and women gathered with friends and family Wednesday at the High School for Law and Justice to be sworn in as the district’s newest law enforcement officers.

The audience cheered after each officer had a shiny silver badge affixed to their uniform by a family member or friend. The new officers walked across the stage proudly, pausing to shake their colleagues’ hands and accept congratulations.

“Before stepping foot on a school campus, please remember that some of our students deal with challenges beyond what you can imagine,” HISD Police Chief Paul Cordova said, offering the officers a few words of advice just before they were officially sworn in. “Remember to have a warm smile and a bit of compassion.”

END_OF_DOCUMENT_TOKEN_TO_BE_REPLACED

At least three times a month, officers with the Houston Independent School District Police Department can be found at the northeast substation, training for emergency events they hope never happen.

HISD Police Chief Paul Cordova said the need for the training is greater than ever before in light of recent school shootings across the country.

END_OF_DOCUMENT_TOKEN_TO_BE_REPLACED

With more than 7,000 employees, Business Operations is the largest division in HISD. But what exactly do we do?

Before students can ever file into their classrooms, bus drivers and crossing guards must get them safely to school. Cafeteria workers must make them a nutritious breakfast. Custodians, police officers, and construction crews must make sure they have new, clean, safe spaces in which to learn.

The breadth of our work touches all facets of the district, and support is at the heart of everything we do. We help lay the foundation for student success — most of the time behind the scenes.

END_OF_DOCUMENT_TOKEN_TO_BE_REPLACED

Local religious, school, and community leaders joined together Friday to kick off the 29th year of Project Safe Start to ensure students are safe as they transition to summer vacation.

Together, the group will ensure additional patrol officers are placed in the immediate vicinity of schools and throughout neighborhoods surrounding school campuses to help monitor and decrease any illegal activity during the last few days of the school year.

END_OF_DOCUMENT_TOKEN_TO_BE_REPLACED

Most people don’t know that some of the most active members of the HISD Police Department are younger than 6 years old, furry, and do their part to keep the district safe.

The K-9 unit is a vital part of HISD’s Police Department, with all police dogs trained to support and protect officers. The K-9s also conduct area searches for drugs, weapons, or other contraband that may be on school grounds or in district facilities.

“The K-9 unit has been around since the ‘90s,” HISD Police Sergeant Tridung Tran said. “We started with two and now we’ve expanded to five K-9s. They allow us to provide a better service to the district.”

END_OF_DOCUMENT_TOKEN_TO_BE_REPLACED

This week, law enforcement officers in HISD and across the country will be celebrated for their service and sacrifice as part of Law Enforcement Appreciation Week.

The annual observance was created in 1962 when President John F. Kennedy signed a proclamation designating May 15 as Peace Officers Memorial Day, and the week in which the date falls as Law Enforcement Appreciation Week.

“Every year we use this time to reflect on the value of peace officers to our society and the immense sacrifices they make on a daily basis to protect the community,” HISD Police Chief Paul Cordova said. “During this week we want to honor both the living and the dead who have dedicated their lives to serve others.”

END_OF_DOCUMENT_TOKEN_TO_BE_REPLACED

The newest four-legged addition to the HISD Police Department arrived last week, wagging her tail to show her excitement.

Officer Boni is a German Shepherd with a Hungarian bloodline. For the next month, she will undergo additional training including obedience, stamina, endurance, and narcotics detection.

“Boni will demonstrate the role and duties of our K-9 team for the public,” HISD Sgt. Tridung Tran said. “We want to build long-lasting relationships with the communities we serve, and our K-9 officers are the perfect ice breaker.” END_OF_DOCUMENT_TOKEN_TO_BE_REPLACED

The Houston Independent School District Police Department hosted a ceremony Wednesday to recognize the promotions of six new sergeants and to swear in seven new officers.

The celebration, which was held at the High School for Law and Justice for the officers and their families, honored the new sergeants, who were officially sworn into their roles last month, as well as the new officers, who were sworn in at the event.

“This is more than a swearing in,” Police Chief Paul Cordova said. “This is a public commitment to the principles of law enforcement, and it’s our officers reinforcing their commitment to serving the community.”

HISD Interim Superintendent Grenita Lathan expressed her appreciation to the department and the new officers for their work in keeping HISD schools safe. END_OF_DOCUMENT_TOKEN_TO_BE_REPLACED 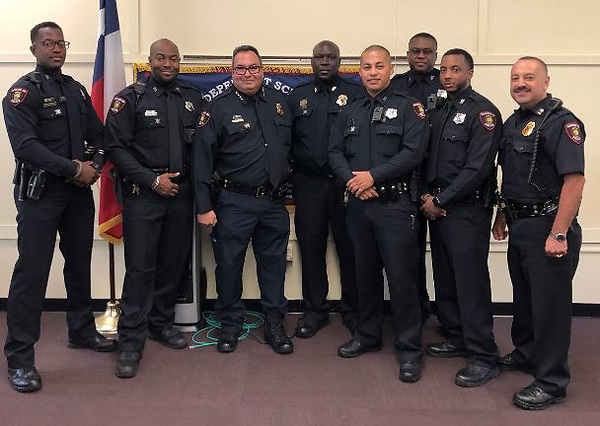 The 10-member team will have specialized uniforms and equipment, allowing them to mobilize and deploy quickly when a crisis occurs.

“If there is an active shooter scene, we don’t have an hour to wait,” HISD Police Chief Paul Cordova said, noting that emergency assistance from external law enforcement agencies can take up to an hour. “What we need is to have the equipment and the personnel in the field ready to go at all times.”

END_OF_DOCUMENT_TOKEN_TO_BE_REPLACED

The Houston Independent School District Police Department opened a new police substation in northeast Houston to better support the schools and communities in that area.

Located in the former Chatham Elementary School on Bertwood Street, the northeast substation will serve the north, east, and central sides of town.

The new location was established as part of the police department’s safety and security initiatives for the 2018-2019 school year.