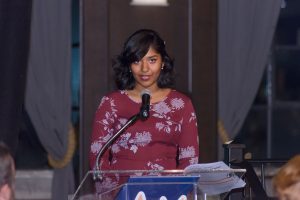 Fareena Arefeen, a junior at the High School for Performing and Visual Arts, has been named Houston’s second Youth Poet Laureate, succeeding Andrew White, who graduated from HSPVA in June and is now attending New York University. The position was created by Writers in the Schools in partnership with the Houston Public Library, City of Houston, and Office of the Mayor.

Arefeen was one of 40 Houston-area students to apply. Candidates submitted five poems to a committee of what WITS Executive Director Robin Reagler called “page poets and stage poets.” The committee narrowed it down to five students, and the finalists were interviewed by a smaller group of published poets. The one-year term includes a book deal, a scholarship, and being mentored by Houston’s Poet Laureate, Robin Davidson.

Arefeen is a first-generation immigrant, coming here from Bangladesh with her sister and mother, who works in a gas station to support the family. According to Arefeen, her mother believes that all Bengali people are poets at heart, so she was not surprised that her daughter was chosen for the position.

The young writer received the honor on Thursday at the WITS Gala and spoke to attendees.

“I grew up feeling uncomfortable,” Arefeen said, “too American for the Bengali people and too brown for the kids I went to school with. I was always struggling to find my place, to feel a sense of community.”

Arefeen read this poem at the WITS Gala.

My mother tells me that I was born outside of the eye of a hurricane,

where the storm is strong and moves quickly in radials.

I think I am a series of low pressure systems and winds that can carry bayous.

a working immigrant in Toronto can be the origin of a poet in Houston.

My ninth birthday was suspended in the space between cyclone and serene.

I guess we are both having growing pains.

I’ve learned that my purpose is flooding.

I want to form inundacions of words and earn

the title of a Category Four. Drought relief and filler of bayou banks.

the way I would like to bring light to the city that taught me how to hold rainwater in the form of letters.

On my thirteenth birthday, I watched the bayou

in the eye of hurricane season felt like bayou backwash

Maybe if I could say that brown is my favorite color,

I would finally see the whirlpools that rest in my skin and in the Buffalo Bayou.

I only came into my skin

after I grew into this city and they both happened like storm clouds; rolling in and all at once.

Now, I find impressions of myself in the silt

as there are maps of this city pressed into my hands like footsteps on wet ground.

On my seventeenth birthday, the clouds broke light rays

the way I want to leave fractures in my city

that can be filled with the work of new artists and immigrants to take my place.

My favorite smell is rain

falling through concrete and cumin because they combine homes.

I can be a drop of water falling in multiple places.

hold its own storm.