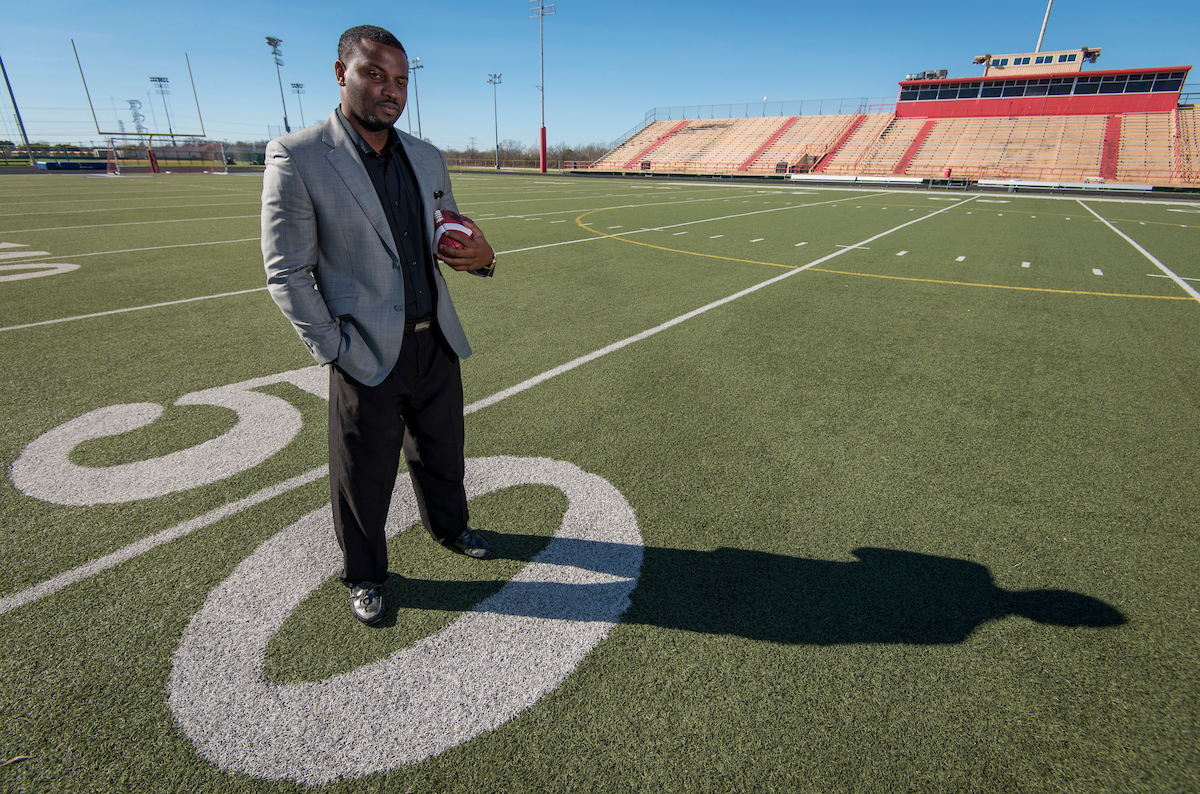 George Walker poses for a photograph at Butler Stadium, January 31, 2017.

George Walker Jr. is an accomplished athlete who was All-American and All-State in football at Westbury High School, graduated in 2004, and went on to play for the University of Texas. Now he is back at HISD, where he was recently named stadium director of the Joe Kelly Butler Athletic Complex – the first African American to hold the position. In this edition of I Am HISD, Walker talks about his new role and how he benefitted from participating in sports.

You grew up in HISD and were a star student athlete at Westbury. What sports did you participate in and what impact did your involvement in sports have on you?
I participated in football, basketball, and track. I was All-American and All-State in football, and was honorable mention in All-State in basketball. I went to the regionals in track. Then I got a scholarship to college for doing something I loved. When you’re involved in sports, you make memories that can get you through tough times, and you learn to fight through things together with your teammates. It also teaches perseverance. You learn never to give up. The sooner you learn that the better off you’ll be going through life.

You’re the first African American to be named director of the Butler Athletic Complex. What significance does that hold for you?
It’s humbling. I’m very proud and truly honored to be the first. But I know in being the first, you need to be successful so that others can come behind you. When I think about guys like Earl Collier, Ira Scott, Mr. Herbert, Mr. Addison, T.C. Moon, Mr. Robert Stewart – he was first black to run Barnett – and my grandfather, Clarence James. When you think about the sacrifices and the work, all they had to endure – it really makes you appreciate their hard work and selflessness, not only for black people but for the Houston Independent School District. Because the work of their backs has opened doors for people like myself and others to come into these type of positions.

The people you just mentioned, who are they and how did they impact you?
They were educators and people I look up to. Earl Collier and Ira Scott were principals and teachers at E.O. Smith Middle school, which was an all-black school in the ’40s and ’50s. Mr. Addison was a principal at Ryan Middle School. When I was a little boy, my mom worked at Wheatley. She’s been there for 40 years, now she’s assistant principal. So a lot of these guys were her principals, her colleagues. A lot of these guys went to my church. I grew up in the church, and these guys really laid the foundation for people to come after them.

I also appreciate the confidence of Ms. Dambrino. She is very much a mentor, she gave me my first opportunity. Her work ethic, her drive, her vision for HISD athletics, and her tenacity for standing up for kids and employees is second to none.

Being a football star at Westbury, really a star in more than football, then going on to play football for the University of Texas, I’m sure students look to you as a role model, especially when they come to play at this facility. What are your thoughts on being viewed by others in that way?
I enjoy the thought of being a role model. I think it’s our duty to inform the ones coming after us, so I embrace being a role model or mentor. It’s our job to equip them. You never know who’s watching you. Everyone doesn’t have the same start, so be a beacon of light to kids coming behind you so they can be successful and live a life better than the one they were maybe born into.

Who was your role model?
My dad. I’ve always just wanted to be like my dad. He is the greatest athlete to ever come out of HISD. He played at Yates High School, graduated in 1974, and went on to play for Prairie View A&M. He never forced me to play sports though. He didn’t pressure me, he encouraged me. He never bragged on himself. He is real loving and nurturing.

Do you have any advice to share with current or future high school athletes?
I’m not one of those people that think I know everything. But I would just tell them that when you’re running your race, whatever your race is, don’t take your race for granted. Make sure you’re mentally focused for it, and run all the way through the finish line. Sometimes in life we assume things and in a assuming, we take things for granted. Things don’t always turn out how you think they will, but stick with it. Persevere.