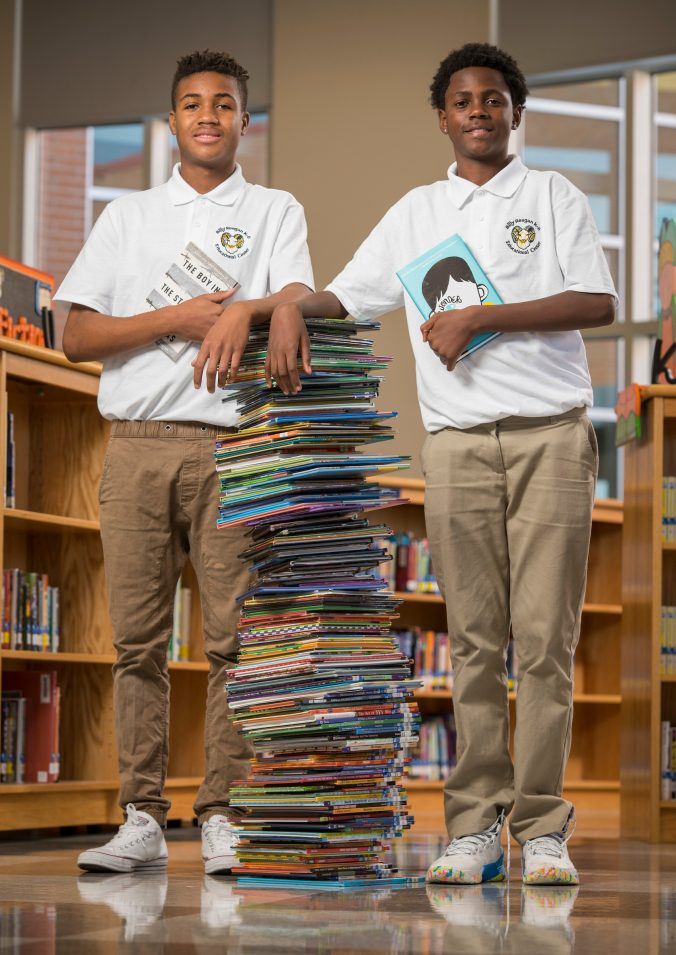 For Alvin Gibson, right, and Deshaun James, left, Literacy in the Middle is giving them voice and choice — plus a little friendly competition. More than half a million books were distributed to HISD middle schools to stock classroom libraries. “Some of them I have read several times because I like them so much,” Alvin said.

The friendship between Alvin Gibson and Deshaun James is based on constant competition. The two teens challenge each other in nearly everything, including basketball, girls, and something a little out of character for middle school boys. Ask them who has read more books, and the two shout out in unison, “I have!”

But it wasn’t always that way. Both Alvin and Deshaun struggled to read in elementary school, and both were diagnosed with dyslexia. Both were also held back a grade. “At one point, I wanted to give up. I thought I was stupid,” Alvin said. “But my teachers and my grandfather pushed me.”

Their love of reading was nurtured through HISD’s Literacy in the Middle program, which stocks all middle school classrooms with a library full of books. And not just English classrooms, but science, social studies, and math as well. The aim is to create independent readers and critical thinkers who can discuss what they read.

“I have seen their desire to read grow with the classroom libraries,” Reagan teacher Benjamin Fullmighter said. “They can choose what interests them. They, and all my students, talk about what they read. They ask more questions.”

Now in the eighth grade at Reagan K-8 Educational Center, they admit they still struggle at times, but they compare reading to sports.

“In order to get better, you have to practice, and that means reading more books,” Deshaun said.