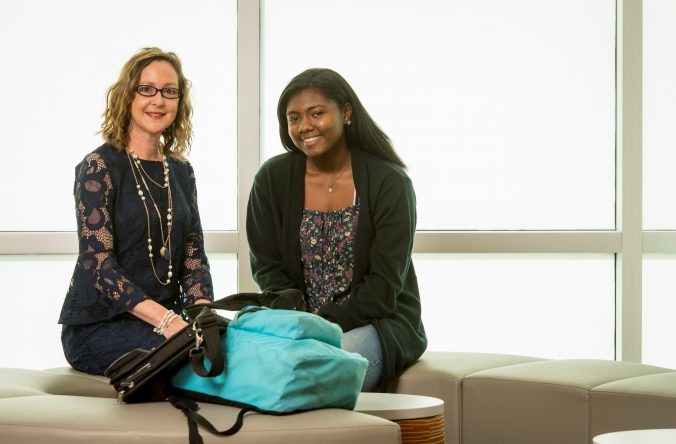 Destini Williams, right, navigated the most difficult time in her life without leaving her studies behind, thanks to help from Deborah Greco, left, with Communities in Schools. The group is one of many that partners with HISD to provide behavior and medical services, parent education, and other social services that address the whole child.

Destini Williams remembers many times in the past four years when she could have dropped out of school. Like when her mother died of breast cancer a month before the start of her freshman year. Or a year later when her father suffered a stroke that put him in the hospital and rehab for nine months. Or after his second stroke last fall.

“She has the determination to keep going even when a lot of people would have given up,” said Deborah Greco, a licensed social worker for Communities in Schools of Houston and part-time counselor at North Houston Early College High, where Destini is a senior. “Her story is not common, but it’s not extraordinary either. The issues are so huge for students, it’s difficult for them to focus on school.”

Destini credits the counselor for providing support, encouragement, advice — and keeping her in school. She remembers meeting Greco in the fall of 2013, shortly after her mother’s death. “I didn’t want anybody to know about my situation,” she said. “But it’s been the best thing that ever happened to me — to have somebody to talk to when I was going through those tough times.”

This spring, Destini will graduate and is looking forward to college. She dreams of the University of Texas at Austin or the University of California at Berkeley and hopes to become an oncologist. But she worries about her dad’s health: “I want to go to college, but I’m not sure what he’s going to do,” she said. “I have to help him take care of himself.”

But Destini has also learned to take care of herself, thanks to Greco.

“The biggest change I’ve seen is Destini’s ability to advocate for herself,” Greco said. “I absolutely see her going to college and fulfilling her dream of becoming a doctor.”