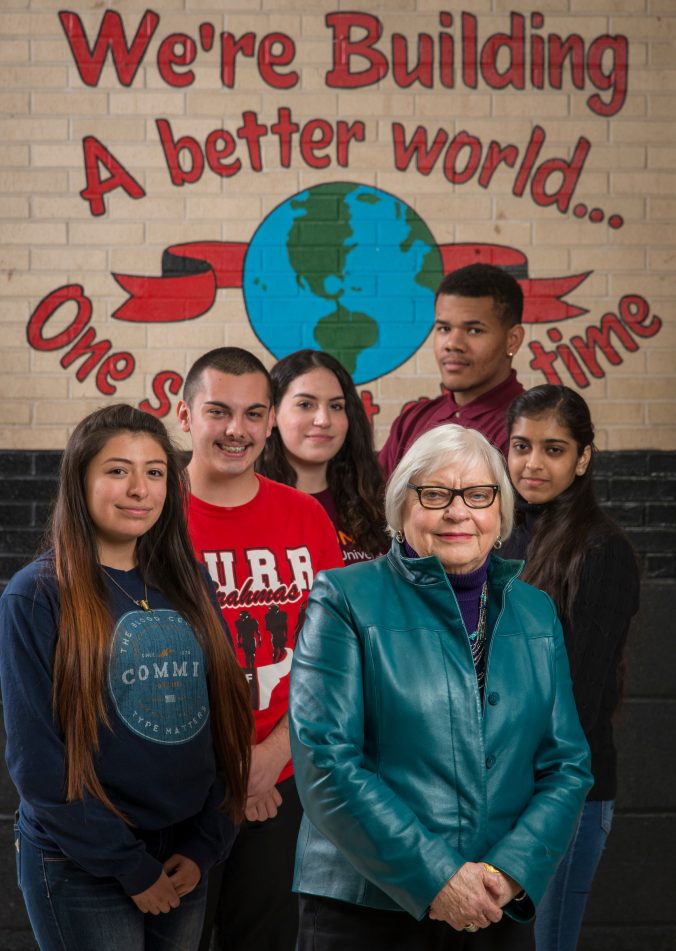 Principal Bertie Simmons has transformed Furr High by believing in every student who walks onto her campus. “We’re trying to teach them they can make a contribution to the world in a very positive way. They usually don’t get outside their own neighborhoods. It makes a big difference to open their eyes to new ways of doing things.”

Furr High Principal Bertie Simmons grabs a turquoise soccer ball from a bag in her storage closet, tosses it to the tall boy standing in her office, and instructs him to kick it around.

The boy — a junior in a neighboring district hoping to re-enroll at Furr — looks dubious but follows instructions. After a few minutes, the 82-year-old principal takes the ball back and holds it up as she connects a cord attached to a bulb, which immediately begins to glow.

“I want you to be innovative and creative and come up with something that will make the world better,” Simmons says. “You could do something like that, because you’re bright.”

The scene is not unique. Students trickle in and out of Simmons’ office throughout the day. Some enroll. Others ask questions about grades, classes, and accommodating work schedules. A few pop by just to say hello or ask for a snack.

It’s a stark contrast from the school Simmons assumed control of 16 years ago. Suspensions were high, graduation rates were low, and there was constant strife on the campus.

Now, the reverse is true. Suspensions have been replaced by a restorative justice program, and 90 percent of seniors graduate. Students have gone to Cambodia to deliver clean water to elementary schools and to Washington, D.C., to work with lawmakers on immigration, standardized testing, and police brutality.

The turnaround was solidified last fall when Furr beat out thousands of schools across the nation to win a $10 million Super School Project grant awarded by the XQ Institute.

“It’s relationships. It’s showing respect. It’s valuing each individual for his or her own personal worth,” Simmons said. “I just believe in these students. I love the parents and the students, and they know it.”