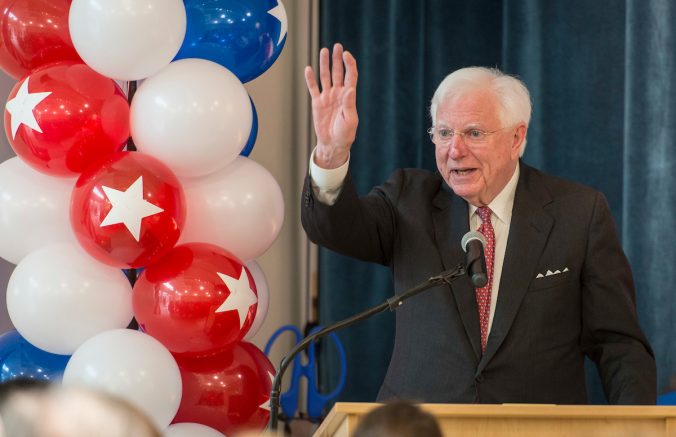 Former Texas Gov. Mark White, namesake for HISD’s Mark White Elementary School and a longtime champion for the district and public education, passed away on Saturday at the age of 77.

White, a former chairman of the HISD Foundation, was deeply involved in the planning of the $23.4 million French dual language school, which bears his name and opened for the 2016-2017 school year.

At the grand opening celebration for the school last year, White acknowledged the significance of having the new building dedicated in his honor.

“It’s exciting. But what gets me so thrilled is looking at the faces of the children who go to Mark White Elementary,” he said. “It’s going to be an exciting place for children to come and learn.”

Mark White Elementary Principal Lisa Hernandez worked closely with the former governor in the planning and design of the new building and said the school is fortunate to bear the name of such a great education advocate.

“During his visits to campus, anyone who saw him or talked to him quickly became aware of his enthusiasm and support for education,” Hernandez said. “I will personally miss having him on campus and know our school community will greatly miss him as well.”

When White was elected Governor in 1982, Texas was ranked as one of the lowest performing states for SAT scores and teacher pay. White appointed a Select Committee on Public Education, called a special session of the legislature in 1984, and worked with lawmakers to pass the Educational Opportunity Act.

Through his focus on education, SAT scores increased, students did better on state tests, and teacher salaries increased by $5,000 annually — the largest proportional increase for educators in state history.