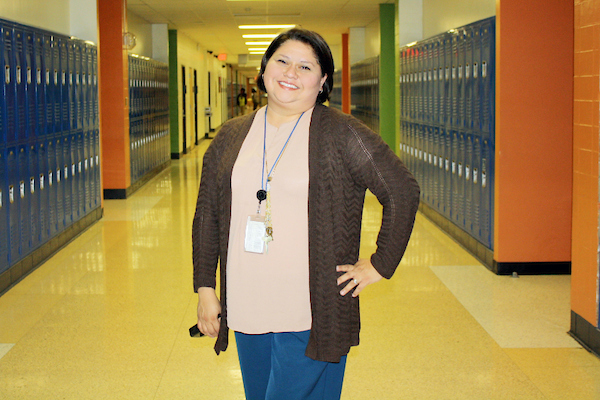 As the school bell rings and chatter begins to fill the hallways at Jane Long Academy, Berta Alicia Ontiveros holds a squawking radio and smiles broadly as she approaches students who are still lingering after the tardy bell.

“Come on sweetie, you don’t want to be late,” she says softly.

Ontiveros is finishing her third year as a social worker for HISD. She works at Jane Long, a school with a diverse student body. Students speak multiple languages and come from varied backgrounds and cultures, which can sometimes make it difficult for them to adjust.

“We have harsh days. We have very harsh days. But then you come back, and it’s a brand new day,” Ontiveros said. “You always have to think about it like that. Hopefully, we are able to help. Sometimes it’s beyond you, but I do the best that I can so that I can help my students.”

The job of a social worker can be wearisome, and Ontiveros has faced many emotional challenges ranging from death to arrest to truancy. She has worked with homeless students and runaways, students in gangs and on drugs, and students involved in neighborhood violence.

A self-described “helper,” Ontiveros sees her role as a social worker as a complement to the teachers and staff on her campus. She views her work as a “granito de arena” — Spanish for grain of sand — that joins the mountain of effort that is put in for students at Jane Long every day.

“Sometimes a hug, that pat on the back, that praise that those kids are needing, or that love … they can get it here,” she said. “As well as their education, of course.”

A native of small-town Brownsville, Ontiveros acknowledges that not everyone could do her job. It takes a “little something special” to work as a social worker at the campus, she said, stopping to dab her watery eyes.

But, Ontiveros said, she has never let that stop her. She simply feels called to work with the students at Jane Long, and she treasures the small things.

“Those smiles, those hugs, the good mornings — I love those,” Ontiveros said. “Every day in the courtyard when I hear ‘Miss, good morning!’ ‘Miss, hi!’ ‘Miss, where were you yesterday?’ It makes my day. I hope that my students know that we deeply care for them.”