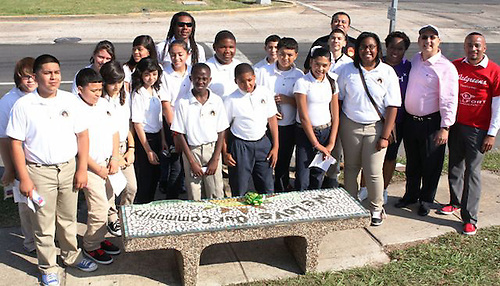 For as long as anyone can remember, the METRO bus stop beside Hartman Middle School has been little more than an unassuming street corner, a spot where commuters can sit on the dusty curb and dangle their feet in the road while they wait for the bus to arrive. But on Monday, June 3, a group of Hartman Middle School students worked to change that by installing a colorful bench as a part of Mayor Annise Parker’s Love Your Block grant program.

“In doing this, I learned just how important this sort of thing is,” said Hartman student Tyrrel Wilson. “This will last years and years, so it’s important to history, it’s important to this community, and it makes our neighborhood a better place.”

The project represents a collaborative effort between METRO, the Bellfort Gardens civic leader group, the Museum of Cultural Arts Houston (MOCAH), the Mayor’s office and, of course, the students themselves. Steven Cooper, Bellfort Gardens leader, wanted to involve the students with this beautification project as a means of introducing them to the idea of taking civic responsibility and ownership of their neighborhood.

“Bellfort Gardens wanted to make you a part of this because we know that how well we support you will determine the future of this neighborhood,” said Cooper to the students. “The best leaders are the ones who serve, and that’s what we want to prepare you for.”

The students were artistically mentored by MOCAH CEO Reginald Adams, who helped them to create the mosaic-adorned bench with the words “We Love Our Community” colorfully splashed across the top. As a Hartman alumnus (c/o ’86), Adams saw this as an important way of exposing the students to the ways in which art can be used to improve their community while letting them know “just how important they are, and how much of an impact their actions can have on this community.”

Attendee Gilbert Garcia, the Chairman of the METRO Board of Directors, encouraged the students to never stop achieving and told them that, with hard work, dedication, and a willingness to pursue their goals, they could someday take a place on the Metro Board of Directors.

“When I attended both one of the largest middle schools and one of the largest high schools in southern Texas, I never dreamed that someday I could be Chairman of METRO,” said Garcia to the students. “But I pushed myself to succeed, I followed my dream, and here I am. I want all of you to dream that you can do something like becoming Chairman of METRO, because you can!”

The installation of this bench may prove to be the first of many more to come, as Bellfort Gardens hopes to continue this civic beautification project, working with METRO, MOCAH and Hartman to create and decorate seven more benches along Bellfort Avenue.