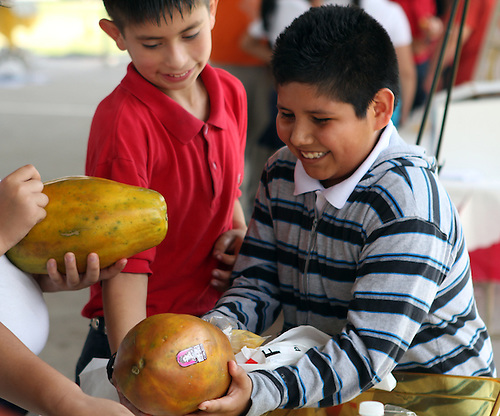 While an apple a day may keep the doctor away, HISD’s Food Services department is hoping to get students to eat a few more than just a single piece of fruit.

Students at Golfcrest Elementary finished off a 3-week long nutritional curriculum with a taste-testing session held last week. The International Fruit and Veggie Festival allowed students to learn about food items with which they might not be familiar.

The festival, which organizer Jennifer Griffin said she hopes to expand to more schools in the district next year, introduced students to giant papayas from Brazil, fuzzy kiwis from New Zealand, tomatoes from Central America and more.

“A lot of these children have never had kiwis, they’ve never had beets or jicama,” said Griffin, a nutrition education dietitian for HISD. “We want to introduce these fruits and vegetables as much as we can.”

The curriculum and festival were designed specifically with children in mind, especially since their taste buds and palate are different than adults, Griffin said.

In addition to introducing children to new foods, the Food Services department is trying to make the task of incorporating fruits and vegetables into a family’s meals a lot easier.

The educational plan was developed with new guidelines from the United States Department of Agriculture, including its new Choose My Plate program, which gives parents not only guidelines on what to feed their children, but portion control as well. The program also helps engage children in deciding their diet, which Griffin said is important to improving a child’s food intake.

At one station of the festival, students were blindfolded and tried to guess which fruit they were eating based on clues of its origin, then its feel and taste. With students getting excited about new foods, Griffin said students will be given recipes to pass along to parents.

“Children will eat if they are hungry and given healthy food choices,” said Golfcrest school nurse Ellen Siegel. “This takes patience and commitment for busy, tired families to improve their health. The school can provide encouragement and set high standards for ourselves and our students.”